From their origins in the first days of human culture, textile skins were portable artifacts and temporary prostheses, shaped by the demands of a mobile body and inscribed with markers of that body’s history.1 The portability of clothing and its proximity to the human body means that it is also changeable; it moves, ages, and wears along with the body it cloaks. Clothes are artifacts in continual flux. They convey messages to the world, and they also provide the raw material for subversion of precisely these messages.

Traditionally, vestments were few and far between. Their production took a great amount of human and material resources. Into their tailored forms much was literally and culturally invested. In the Western tradition, throughout the Middle Ages and Renaissance, clothing, once shaped to a given body, might be worn for years, sometimes carried for a lifetime.2 The clothing wore its owner as much as the owner wore the clothing, bearing comparable markers of a personal narrative. Through the movements of a body in time, its clothes would acquire increasingly personal and human characteristics—worn knees and elbows, a stretched waist. Stains, patches, tears, and color changes accompanied a life journey, or at least several decades thereof.

Sometimes an article’s function was portable. This was especially true when even the simplest clothing was scarce, its production costly, time-consuming, and labor-intensive. A coat might be cut down into a vest, or a dress into a scarf. As a garment’s function evolved, so too might the identity of its wearer. A dress might be handed from mother to daughter, carrying with it signs and markers of generational passing. A master might give his worn-out shirt to his servant, for whom it could either serve as bodily cover or portable currency. In the Renaissance, it was common for servants to sell their masters’ old clothing to peasants in neighboring villages. Itinerant rag and old clothes dealing grew into a veritable calling—a profession of portability. The dealer became an intermediary between wearers, marking a transitional phase in an article’s mobile life history.

The advent of mass reproduction heralded an era of increasing clothing production, in Europe and North America especially. The more clothes there were, the more they changed hands. Cotton gins, mechanical looms, and sewing machines made clothing easier to produce and more affordable to populations. By the mid-nineteenth century, prêt-a-porter (ready-to-wear, ready-to-carry) clothing was being produced, traded, and consumed in the international market economy. With more clothes for the taking, the middle class purchased more of them, therefore wearing each garment for less and less time.

Fashions changed faster. Clothing, manufactured by a mechanized immigrant labor force, became increasingly inexpensive to produce. Clothes became common instead of rare, and worn clothes were discarded or exchanged at an ever quicker pacer. The paths of clothing increasingly departed from the bodies of single individuals and their families and began to travel the world. The result of excess was a new genre of, and set of possibilities for, salvaged clothing as a medium of grassroots circulation, transformation, and exchange.

A range of paths developed for the second (and third and fourth) lives for secondhand clothing by the nineteenth century. By the early twentieth century, secondhand clothing was resold in shops and through itinerant merchants. In the U.S. context, most of these junk and rag dealers were enterprising Jewish and Italian immigrants. In New York City, for example, ragmen collected cast-offs from uptown and carried them downtown for purchase by recent arrivals in need of inexpensive clothing. A new set of bodies, and a new set of histories, carried the old clothes into new places and directions.

A wool suit jacket tailored on the Upper West Side traveled on the back of a wealthy banker between Central Park and Park Avenue. Stained at a champagne toast and discarded after six months, the suit jacket navigated a new existence in the thicket of the Lower East Side. Picked out of a rag dealer’s wheelbarrow, minus several buttons, it was purchased by an Orchard Street milkman who wore it on a daily delivery route winding through Chinatown. The jacket took the shape of its wearer and carried his weight. Traces of the Jewish community—the smells of Eastern European cooking and cast-off buttons hawked by a peddler—were inscribed deep into the warp and woof of the woolen fabric. The satin interior, a second skin lining a second life, carried the increasingly sweat-stained labels naming its original owner and the uptown tailor. Every wearing in is also a wearing out.

Textile media—both the material out of which new entities are produced and also the means by which information is encoded and information transmitted—spread across the globe. Clothing’s portability grants it a history of embodiment and transmutation, moving among bodies, cultures, nations, and economies. It carries traces of one across the boundaries of another. In the late twentieth and twenty-first centuries, cast-off clothes from North America and Europe increasingly journey overseas en route to encounters with new wearers. Clothes are compressed into half-ton bricks, bales that might contain the shirts off hundreds of human backs. A Panamanian ship manned by a Romanian crew carries the discarded textile skins to Port-au-Prince. What arrives in Haiti, called pepe, is a resource to be worn (pote in Kreyol), an identity to be had, and a politics upon which to reflect. Pepe is a portable currency whose materiality is transformed by multiple processes of alteration, exchange, and wear. Clothing wears the traces and bears the burdens of a global media history in progress.

Note on the Figures:

These photographs document secondhand clothing’s role as a medium of communication and a means by which to subvert hegemonic styles and standard economic pathways. Vanessa Bertozzi and Hanna Rose Shell created these images (based on their travels in Haiti during the summer of 2006) as part of a collaborative ethnographic project that culminated in their 2007 experimental media essay Secondhand (Pepe).

Hanna Rose Shell is an assistant professor in the program in science, technology and society at the Massachusetts Institute of Technology and a junior fellow of the Harvard Society of Fellows. Her book Hide and Seek: Camouflage, Photography and the Media of Reconnaissance is forthcoming from Zone Books in 2012. Her film Secondhand (Pepe) was released in 2007 and is distributed by Third World Newsreel. 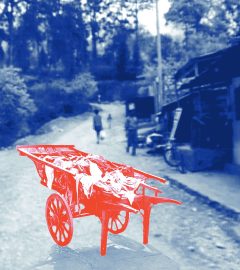 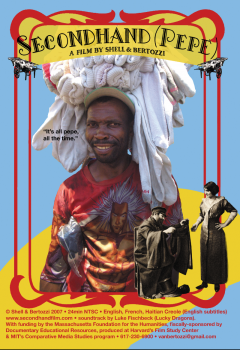 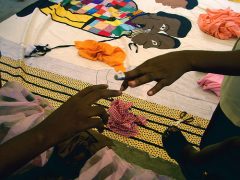 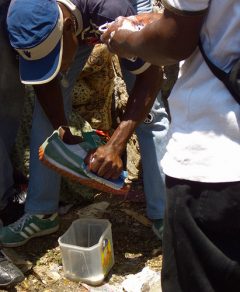 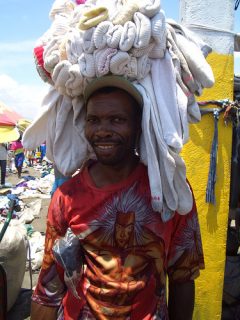 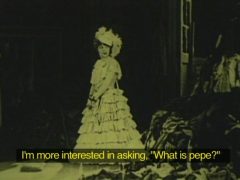 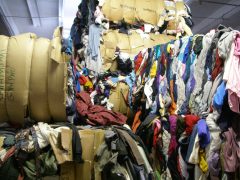 Bales of Clothing in Miami before being shipped in freighters to Haiti to be sold and worn as Pepe. Photo: ©Shell/Bertozzi