When Claire Beck married Adolf Loos in the summer of 1929, he was nearly sixty and in fading health. He was still working. In fact, he was then engaged with what would later be acknowledged as some of his seminal designs. The Villa Müller in Prague, the culmination of his two-decades-long experiment with spatial planning ideas, was under construction, and he had several other important works on the boards or in progress, among them the Khuner House in the village of Payerbach in Lower Austria and a project for a house for Hugo and Lisa Bojko in Vienna. Craftspeople were also completing several interiors he had created for clients in Pilsen, in Czechoslovakia, where he had long been active as a designer.

Claire Beck was the daughter of another of his patrons in Pilsen, Otto Beck, who was co-owner, with his cousin Wilhelm (Willy) Hirsch (yet another of Loos’s clients there), of the Pilsen Wire and Nail Works. She was only twenty-four. Her father, just two years older than Loos, was adamantly opposed to the marriage and refused to give his blessing, but Claire persisted, and after hasty arrangements, the two were wed in Vienna, with only Claire’s mother, Loos’s maid, and a few others in attendance. The marriage was a disaster: the two separated in 1931, and they divorced the following year. Loos died a short time later, in 1933.

The whole episode might have remained scarcely more than a footnote in Loos’s biography had not Claire Loos (she insisted on keeping his surname) published a little book in 1936, Adolf Loos Privat, a series of telling vignettes about Loos and their all too brief life together. The work here under review is the first English translation of that work, augmented with several texts and family photographs by Carrie Paterson, Claire’s great niece, who lives in Los Angeles.

The original book, small in format, runs a little more than 160 pages and is divided into brief, discrete chapters, most no more than two or three pages in length. Each is titled and relates a brief story about some moment or exchange in Loos’s life of those years, episodes in nearly every instance that Claire Loos witnessed in person. Most of the chapters fall into one of several categories. Among these are incidents that underline Loos’s ideas. He once berates his young wife, for example, for wasting soap: “Don’t you know,” he cries at her, “that I have spent my entire life fighting against the senseless, against ornamentation, against the waste of energy, against the waste of material”(24). There are also chapters that illustrate well Loos’s character, his insouciance in matters of money (Claire wonders one day why he has no bank account; he responds that money is to be spent, nothing more), his often gruff manner with those around him (he frequently scolds her, his assistants, and his clients), his intransigence in questions of design, and his admitted anti-Semitism (in spite of the fact that most of his friends, two of his four wives, and many of his assistants and students were Jewish).

What makes the book most valuable is the fine-grained portrait it provides us of Loos’s last years, of his activities and his preoccupations. In the chapter on the Villa Müller, for instance, Claire Loos writes, “The Müller house is growing. Loos orders an overhang of half a centimeter on the house. He drives away. When he returns, the overhang measures an entire centimeter instead of only a half. Loos is beside himself and has the extra half a centimeter taken off all the way around the house” (36).  (One is reminded here of Ludwig Wittgenstein—a protégé of sorts of Loos—having a similar exchange with his builder concerning the house he built for his sister on the Kundmanngasse in Vienna.) But Loos always has clearly expressed reasons, as Claire discovers, for what seem at first glance to be rather capricious decisions. She wonders aloud about the small size of the dining room in the Müller house. He replies, “It is large enough as long as the maid can comfortably serve the meal. There is no need for more room than that” (37). The kitchen, too, she finds, is “surprisingly small.” She soon learns the reason: “Cooking is done here following the American system. Everything is within easy reach and has its own designated place. Loos uses the kitchen of a dining car as a model. A light is installed above the stove. The window is high. Loos explains, smiling: ‘it is unnecessary for the cook to be able to look out of the window while cooking’” (38).

But Claire also discovers that Loos at times gives into flights of pure fantasy. During a stay in Nice, she observes that he spends a great deal of time searching for property on which to build: “He never tires of looking over property with the agents. Calculations are made, measurements taken, bartering done. Dead tired, but healthy as never before, he returns at lunchtime. I dare once to softly ask a question: ‘Dolfi how can any of this end well? We do not have any money!’ He looks disappointed. Defiant like a child who is about to have his favorite toy taken away, he replies: ‘How can you spoil the enjoyment I am getting from working on this project by asking that, Lerle! Didn’t I tell you we have to be ready for when the rich financier shows up?!’ Irritated, he leaves me; soon he has built the entire Riviera in his head” (93).

The marriage ended unhappily. Loos’s intransigence and continual verbal abuse of his wife, the latter a symptom of what could only be characterized as mounting paranoia, were the chief reasons. Toward the end of her book, Claire Loos relates one anecdote that exemplifies the growing friction between them. It concerns a letter Loos received from one of his assistants, Norbert Krieger, also from Pilsen. Krieger wrote to Loos informing him that one of their clients wanted Krieger to design a project for him. Krieger told Loos, “Since I am working for you, I didn’t accept. What should I do?” The letter angered Loos. When Claire defends Krieger, he charges her with betrayal and sends her away, exclaiming, “[L]eave me alone!—You will cause me more grief than Josef Hoffmann, my worst enemy” (132–33)!

After the divorce, she saw him once more, on his deathbed following a major stoke. He is pleased to see her and immediately plans a trip with her, which both know is no longer possible. As she departs, she writes, he was “sitting up straight in the wheelchair, motionless. He does not speak, he does not wave, he looks towards me . . . (138).

Claire Loos survived her husband by less than a decade. As Carrie Paterson tells us in the afterword, she and her mother were interned at Terezín (Theresienstadt) in 1941; in early 1942, she was deported to Riga and was killed almost immediately upon arrival there. She was thirty-seven.

The English translation of her book, made by Constance C. Pontasch, is fluent and accurate, conveying well the tone of Claire Loos’s original (which, in turn, to some extent mimics Loos’s own writing style). Paterson’s introduction and afterword, along with some forty previously unpublished family photographs, add to the story and help flesh it out. It is a richly informative, if sad, tale, and, in Claire’s telling, undoubtedly a very largely truthful one.

But in a sense it is misleading, for though it exposes Loos’s many personal idiosyncrasies and faults, it sheds precious little light on his working method or on the true wellspring of his talents. In the end, none of the anecdotes quite reveals what lay behind his design of a work like the Villa Müller, so complete and so pregnant with architectural meaning.

Christopher Long is professor of architectural and design history at the University of Texas at Austin. 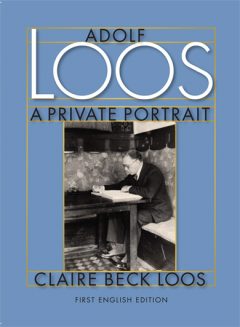