In Ernst L. Freud, Architect: The Case of the Modern Bourgeois Home, Volker Welter sets out to reconstruct the life and career of the youngest son of Sigmund Freud, a little-known architect who had a modest practice in Berlin before relocating to London in 1933. This is an interesting but challenging project, because Ernst Freud’s work rarely rose above the celebrity of his family connections. Nevertheless, Welter offers a comprehensive account of Freud’s architectural works in both Germany and England, with a focus on his domestic projects, including villas, country houses, and apartment interiors.

Ernst Freud was born in Vienna, where he first studied architecture at the Technische Hochschule, going on to further study in Munich before starting his practice in Berlin in 1919. Unlike his more avant-garde colleagues, Freud took a pragmatic approach to his chosen field, which was largely domestic design, believing that modernism and historicism should play complementary roles in the development of the bourgeois home. As a result of this middle-road approach, his domestic works neither had a refreshingly new aspect to their exteriors, nor did they project any radical propositions in their interiors. They were plain but comfortable, blending features from both traditional forms and the most recent design tendencies.

Welter’s approach is to treat Freud’s architecture as a case study, thus allowing him to challenge the familiar and acknowledged historiography of European architecture in the period. The standard modern histories of architecture and of interior design tend to highlight those few avant-gardists who forged a fundamental break with the past. In so doing, they neglect the large majority of architect-designers who took a selective or moderate approach to the modern movement as a whole. Freud clearly belongs to this latter group. He was undoubtedly a successful residential architect; he enjoyed a good number of clients, and Welter points out that his contemporaries considered him at various times to be as important as Adolf Messel and Erich Mendelsohn. For Welter, therefore, Freud exemplifies a large number of architects who sought to modernize the bourgeois home but were reluctant to engage in the larger social engineering that went with it. This attitude represented a substantial sector in the interwar architectural profession. Contemporary journals and magazines show that a large portion of German bourgeois homes in the 1920s and 1930s featured a style that can be loosely described as “mitigated modernism.” Although ubiquitous then, this trend is all but forgotten today. Welter’s book aims to remind us that modernism in the bourgeois home was achieved not by an aggressive replacement of tradition but, for the most part, by attempts at compromise: “evolution,” not “revolution.”

As a clarion review of domestic culture in the 1920s and ’30s, Welter’s book provides a close look at the subtle development of the bourgeois home, shedding light on the transition of middle class culture from a more glorious past to an unknown future amid the precarious, postwar period of crises and depression. In examining the projects in Berlin, Welter does a particularly good job in locating Freud in the context of early twentieth-century German debates on architecture and design. He offers extensive comparisons of Freud’s work with those by more famous modernists, such as Erich Mendelsohn and Mies van der Rohe, and in so doing he pointedly indicates the gentler path Freud took in modernizing bourgeois homes.

Yet, given Freud’s Viennese heritage, and the fact that active cultural exchanges existed between Austria and Germany at the time, it is unfortunate that Welter does not broaden his investigation to embrace developments in contemporary Vienna. One thinks here of Wiener Wohnkultur (literally “Viennese dwelling culture”), a design trend that flourished in Vienna during the period from 1910 to 1938, and that was exemplified in the works of Oskar Strnad and Josef Frank. Both promoted a middle path to modernism and argued that modern homes should incorporate the efficiency of the modernist style while retaining the comfort of traditional dwellings. The heyday of the Wiener Wohnkultur overlaps directly with Freud’s practice in Berlin, and it seems likely that Freud would have absorbed some of its ideas, if only through his extended family circle in Vienna.

To design such a curious professional space, Ernst naturally turned to his father’s consulting room in the apartment block at Berggasse 19 for inspiration. He codified and repeated its essential legacy: a comfortable couch standing along the wall for the patient, with a chair at the head end for the analyst. These two pieces of furniture defined the core space of the elder Freud’s consulting room. Ernst Freud later altered the arrangement of the two pieces in his design for the consulting room of Sanatorium Tegel in Berlin, where the couch stood freely in the center of the room, with the chair set apart in a corner, at an angle to the couch. In this configuration the couch could be perceived as exposed and vulnerable, whereas the chair was hidden and secure. It is a small but significant revision to the patient-therapist relationship, and one longs for more discussion of why Freud modified the arrangement, and how it might affect psychoanalytic treatment.

Welter devotes a great deal of attention to Freud’s clients. He provides tables demonstrating the distribution of backgrounds, professions, and ages of the clients at various stages of the architect’s career. Most of the clients knew Freud personally, which affirms Welter’s argument that Freud responded closely to individual cases rather than setting out to create a distinctive personal style in his designs for bourgeois homes. While this is fascinating and very revealing in terms of the management of the practice, I would have welcomed more on how Freud worked with his clients on a day-to-day basis. Only a short section in Chapter Five, “Houses in and Around Berlin,” addresses the architect-client relationship, and, even in this section, most of his text is devoted to discussing Richard Neutra’s difficulties with patrons (Neutra was a friend of Freud, and the two worked together on a few domestic projects). In his only known written statement about modern architecture, Freud claimed that clients play an equal role to architects in creating successful modern homes. Given the importance Freud attached to his clients, one would like to read more detail of this collaboration.

Welter presents his material in a clinically factual way. His primary sources are Richard Neutra’s diary, Ernst Freud’s letters, and his clients’ letters. He depicts Freud from the perspective of the people around him, but rarely does he give the architect close personal scrutiny. This is all very well as correct historical method, but the book offers few places where we can detect Freud’s own voice; his character as an architect or as a person remains vague. We are left therefore with few clues to understand the correlations between Freud’s personality, his understanding of architecture, and his completed works. Welter also does not fully address why Freud promoted this mitigated modernism in bourgeois homes. What features of modernist style did Freud view as unsuitable for bourgeois homes, and what characteristics of traditional homes did he value and consider worth keeping? The book also lacks images for a good number of buildings and projects, especially remodeling projects for apartments, which played an important role in Freud’s career, particularly in times of economic hardship.

These reservations notwithstanding, this monograph provides a useful record of Ernst Freud’s life and career based on meticulous research. It also succeeds in revising our understanding of the development of modern bourgeois homes. Freud’s domestic works affirmed traditional bourgeois lifestyle while incorporating features from a progressive vision of modern life. He managed to achieve modernity in bourgeois homes without cutting their connection to the past, a legacy that is still relevant today.

Xiangnan Xiong is a doctoral student in the history of architecture at the University of Texas at Austin. 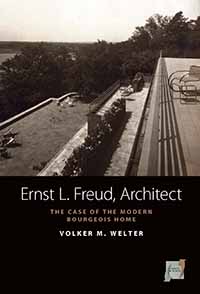