Readers of West 86th, published in the United States, may be surprised to find here a review of the French edition of this book when there exists a perfectly good English-language translation. The reason is that the latter, and to a lesser extent the former, are already “rare” books. When, soon after the books’ simultaneous publication in Paris in September 2012, the editors of West 86th sought to obtain from the Louvre a copy (in either language) for me to review, they were informed that the English edition was out of print; neither the museum nor the commercial publisher was able to supply the French edition. The response (after many months) from Amazon.fr, where the price was quoted at 37.05 euros, was, and still is, similar. The English version, which I for a short while held in my hands (it weighs more than three kilos) thanks to interlibrary loan, was in early January 2014 reported by the museum as “exhausted.” As of this date according to World-Cat, there exist 130 copies in institutional libraries. Those still seeking a copy will be obliged to obtain the French edition from Amazon.fr, a commercial river that flows very sluggishly in comparison with its American equivalent. This is the edition reviewed here (though prospective buyers should be aware of a much slighter and cheaper French version published under the same title). The English version does not give up much to the French in that the translation is for the most part excellent,1 and the complement of magnificent photographs by Hughes Dubois is the same. By some miracle of publishing the photographs and their accompanying texts occur on the same pages in both books. The page references below therefore apply to both editions.

Given the readership of West 86th, it is the book’s intellectual qualities and its unusual concern with materiality that I shall stress, concentrating on creations from before the sixteenth century, the era that I know better and from which come more than one half of the entries in the catalogue.2 Even before considering the ideas conveyed by the most insightful essays, the essential relationship between the accompanying photographs and the materials and techniques in question deserves to be brought out. The art historian who is allowed to examine an object rejoices in the immediacy extended by this privilege. But for others without such access, first-class images, especially when accompanied by telling details, are the best, indeed the only, alternative.3 Hence the invaluable role played by the images in this book. A few examples, chosen almost at random, will make my point. As magnified, a “bird-flower” panel on a fragment of Aleppo pine (p. 102) is large enough for us to observe the grain of the wood and how this changes direction at successive levels of the beveling, enabling the craftsmen to suggest the shape of the animal’s head transforming itself into a tuliplike form.4 Similarly, the skill of the metalworker who signed his piece “work of ‘Abd al-Malik the Christian” is fully evident in the imbricated feathers on a bronze peacock cast in the year 972 (p. 95). Occasionally the magnificent photographs allow experiences unavailable to the visitor to the museum. Thus a late twelfth- or early thirteenth-century stonepaste cup with hunting scenes is shown lighted from the inside, an effect that upends the viewer’s initial impression of opacity.

Underlying such insights is of course the unmediated familiarity with the objects of those who (in contrast to too many contributors to American exhibition catalogues) have held them in their hands, an experience indicated, for example, in the discussion of an Iranian candlestick (fig. 100). In the photograph, as in the museum’s vitrine, it looks very heavy, but as Annabelle Collinet reports, it is, in truth, surprisingly lightweight, due to the fact that the object was made from a single sheet of copper alloy before its incrustation with silver and copper. The candlestick is worked in repoussé, a far from simple technique given the multiplicity of the motifs (ducks, felines, and ornamental bosses) employed. Still in the realm of material studies, Gwénaëlle Fellinger gives a brilliant account of the manufacture of enameled and gilded glass vessels of the late twelfth and early thirteenth centuries (pp. 233–35). Thus a translucent glass bottle with a long neck (more than 51 cm tall overall) was made first by heating silica and a potassium or sodium flux to 1,100 degrees Celsius. The resulting molten liquid was then blown to form the bottle. After it was chilled, the bottle was brush-painted with gold dissolved probably in a mercuric medium before the application of opacified and colored glass—blue from lapis lazuli, red from iron oxide, yellow from lead and lime—to form enamels that required a final controlled re-firing. This last step was peculiarly fraught in that it could have deformed the entire object, ruining the glassblower’s original achievement.5

It goes without saying that the chemistry of materials was not uppermost in the crafter’s mind. Rather, it permeated his or her practices even as these were shaped by unconscious awareness of the physics evident in the scientific writings of al-Haytham and the spiritual implications of light in Muslim religious commentary. Discussion of such texts is understandably not the prime concern of the contributors, who, ever pragmatic, rightly pay more attention to the ways in which things worked and the circumstances for which they were made. Even the smallest object may be fruitfully treated in this manner. Thus Claire Déléry suggests that the little fragment of a lustered cross from an Algerian site, the gift of the military commander and archaeologist Léon de Beylié, was originally made for a dark room in the tower of a now ruined palace where reflections from its gilded glaze could be seen to best effect.6 In the same vein, cautious but not afraid to let his imagination run, Rocco Rante writes about the semiabstract (fan-shaped or peacock-tail) motifs recurrent in wood, marble, and stucco elements in the palace complex of Dar al-Khalifa at Samarra (p. 86), arguing that these “must have lent a strong visual unity to this space, the center of caliphal pomp.”

Elsewhere Rante and Makariou provide a useful account of the evolution of lusterware (pp. 72–75), which entails a complicated multistage process developed, though not necessarily invented, in ninth-century Iran. Lusterware and inscribed “engobe sur engobe” (slip on slip ware) together represent the best in Islamic ceramic decoration and, in my view, its calligraphic acme. Even if these ceramic techniques initially derived from Chinese porcelain (the yin and yang sign at the center of the Louvre’s plate, on pp. 108–10, may be telling evidence), it is the enclosing epigraphy that is the great glory of this enduring medium. Many of the inscribed texts are adages or quotations from the hadith (traditions of the Prophet), and in other cases literary inspiration is mooted for objects made for the highest social ranks. In an endnote Makariou estimates that the library of the Spanish Umayyad caliph al-Hakam II (d. 976) contained twenty thousand books, as opposed to the collections at Cluny and Fulda that held probably less than one thousand.7 Thus textual inspiration is a distinct possibility. Nonetheless, in the case of the stonepaste hunting cup alluded to above, despite its (damaged) Persian verse inscription, she observes that “what precise [literary motif] came to the mind of the fortunate user of this precious vessel [the English translation uses the humbler term “dishware”] . . . can no longer be correctly understood.” This approach depends upon the method of iconographic investigation undertaken in Germany and the United States by Erwin Panofsky. I would suggest instead the possibility that the decoration had no precise meaning, given that hunting imagery had been used for millennia before (and long after) this object was made. Pleasure in the visual for its own sake and a generic depiction of a long-enjoyed activity may in themselves be sufficient justification for the cup’s existence.

In other cases, however, awareness of the literature involved—including ancient texts that had become outmoded or ignored—is essential to the full apprehension of an object. For example, the stars’ coordinates on a magnificent brass celestial globe or astrolabe cast in 144–45 (a date inferred from its inscribed content; pp. 150–53) differ from those given in Ptolemy’s Almagest, even while the iconography of the zodiacal constellations on the globe remains faithful to the antique models of the Greek poet Aratus. The tension between decoration and information is central to the story of Arabic epigraphy, and it is a main problem raised by angular kufic scripts of the eleventh and twelfth centuries. Indeed, Carine Juvin goes so far as to suggest that some of these were intentionally difficult to read and that the “rhythmic interplay of verticals, backward-bending terminals, vegetal elaboration and knotted interlaces” (pp. 145–46) show the triumph of the ornamental over the legible, an evolution hardly envisaged by al-Haytham when in his eleventh-century treatise on optics he reflected on the role of harmony in calligraphy.

The essays in Les arts de l’Islam often integrate architectural decoration into the narrative, as against those American catalogues in which buildings are shunted off to the ghettos of separate chapters written by separate hands. The resulting oneness of architecture and the geometric motifs that inhabit and adorn it is observed by Annie-Christine Daskalakis Mathews in a short but brilliant discussion of the porch of a Mamluk house in Cairo (pp. 261–64). This original contribution is no less valuable in its way than the historiographical information in an account by Makariou of the uncovering in the 1920s—and thus before their problematical later restorations—of the mosaics of the western portico of the Great Mosque of Damascus, which had been plastered over during the Ottoman period. The watercolors recovered in 1999 that record these finds have a direct bearing on the history of modern art: the palette of the mosaics was much admired by Louis Vauxcelles, the inventor of the term “Fauvism,” who compared the palaces depicted in the mosque to the work of Raoul Dufy, while the trees in their parks evoked for him the creations of Derain (pp. 80–84).

All in all, however, it is the incorporation of material culture studies into art history that is the novelty and final achievement of Makariou’s catalogue.8 Not every object discussed in the book is presented in this way,9 but here we have a superb example for its successors to emulate.

Anthony Cutler is Evan Pugh Professor of Art History at Penn State. He is one of the United States’ foremost Late Antique and Byzantine specialists and an international authority on ivory carving. Currently, he is working on larger problems of exchange between Byzantium and early Islam. He was elected Slade Professor of Fine Art at Oxford University for 2011–12. 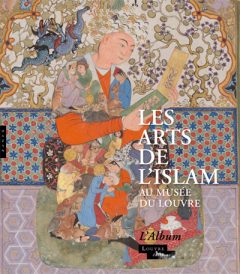