An influential recent study of Spanish-English bilingual residents of the United States and Mexico extends earlier research proposing the existence of a phenomenon dubbed Cultural Frame Switching, whereby “bicultural individuals shift values and attributions in the presence of culture-relevant stimuli.”1 The study confirms a number of earlier quotes from bilingual subjects who have reported feeling that they have two different personalities, one for each language. In the bilingualism study, a major stimulus of Cultural Frame Switching (as evidenced in the stated self-representation of the subjects) is shown to be language, but other influencing cultural materials cited in earlier research included the most ubiquitous iconic imagery from one or the other culture (Superman or Chinese dragons for Chinese Americans, and so forth). This capacity of objects, images, and words to impact upon the social construction of identity, whilst simultaneously constituting evidence of multiple identities, forms a major aspect of the supremely accomplished study of medieval Indo-Islamic material culture presented in Finbarr Flood’s latest book. The cultural model proposed in Objects of Translation is emphatically not a simple either/or choice between two socio-linguistic structures, but then neither is that suggested by the bilingualism study. Subjects did not dramatically reconfigure their selfhood between languages, but subtly shifted towards modes of self-representation that were more easily accommodated within the cultural model in which they were currently operating. This internalized “cultural accommodation,” apparently a common means of maintaining more than one cultural persona within a pluralistic society, is a phenomenon directly related to Flood’s Objects of Translation; in particular, it impacts directly upon the creation, adaptation and representation of power structures within pre-existing or shifting hierarchies, one of the recurring conceptual tropes that orders the spaces, images, and objects explored within the book.

Flood has taken a determinedly linguistic model of cultural interpretation in his study of the medieval material culture of an area that stretches from eastern Iran to north India, proposing the act of “translation” as both metaphor for and medium of cultural transformation (pp. 11–12, 180–182). The nucleus of the book is a study of the architecture and artifacts created in Afghanistan, Pakistan, and north India under the Ghurids, a relatively short-lived dynasty that conquered Ghazni (now in central Afghanistan) in 1150 CE, reached its apogee in the latter part of the twelfth century, and was effectively over by the end of 1206. The brief reign of the Ghurid sultans, as well as the sparse material remains of the culture and its position in a kind of Islamic Studies no-man’s-land, straddling both Persianate and Indic territories, has led earlier scholars to refer to the sultanate as the “Ghurid interlude,” and the period is frequently characterized as both ephemeral and opaque. Ghurid material culture has seldom, if ever, been happily integrated into survey texts of Islamic art history, and the surviving architectural monuments are often treated as something of a false start before the canonical Indo-Islamic cultures of the Delhi Sultanates (the warm-up act) and the Mughals (the main event) get going.

But the Ghurids are only part of the story. Flood’s text begins with a close examination of Indo-Islamic relations at the “eastern frontier” of the ‘Abbasid caliphate from the ninth century, emphatically and repeatedly highlighting the redundancy of the simplistic “Muslim versus Hindu” binary structure of conflict and mutual incomprehension between two diametrically opposed civilizations that has dominated earlier studies. Instead, complex nuances of exchange evinced within the circulation of things and people in what Flood terms the “mercantile cosmopolis” are painstakingly delineated (chapter 1). The mechanisms of this cosmopolitanism are framed within the author’s assertion that this historical milieu should be considered as part of the prehistory of globalization (pp. 1–2, 265). There is a certain dizzying exhilaration in the realization that no part of this picture is going to be simple. Flood is relentless in his insistence that every text, coin, or architectural element be scrutinized in its own right, that the ambiguities and apparent contradictions of these border-zone artifacts be exposed and explored rather than compressed within a streamlined narrative. Simultaneously, a parallel focus on historiography is maintained throughout, picking apart the existing models of scholarship and extracting a pungent mix of prejudices: the legacies of nationalism in its many forms and the tenacity of colonial-era narratives appear over and over again. Less explicitly stated but no less present is the big question that now dogs the field of Islamic art history: at what point should the urge to assimilate alterity within a monolithic model of “Islamic” artistic production—a stance which, although widely acknowledged as problematic, has successfully given an identity and voice to a very neglected subsection of the history of art–be abandoned in favor of a fracturing of the discipline? And how will the disciplinary fault lines be redrawn when this happens?

Nowhere is the non-canonical status of pre-Mughal Indo-Islamic culture more plainly demonstrated than in an extraordinary group of four monumental doorknockers excavated at Mansura in Sind and datable to the early 880s (p. 49). These boast Arabic inscriptions—Qur’anic in part—in a precocious foliated Kufic script, in combination with large zoomorphic and anthropomorphic faces in a highly sophisticated Indic style that could have come straight from the walls of a Hindu or Jain temple. Equally significant is the lobed shape of the hexafoil rings of the knockers: the form is well known from later doorknockers (particularly from Mamluk Egypt), making the Mansura pieces the earliest existing examples of a widely distributed and highly visible form in Islamic metalwork. Yet, as Flood observes, they are nowhere to be seen in the survey texts, and few students of Islamic art will have seen them before. The discomfort of earlier scholars in the face of pieces that present such a profound “lack of fit” within dominant historical narratives is evident in the anxious questioning they have generated: are they Muslim or Hindu? How can their integration of forms be squared with the supposed Muslim opposition to images of divine beings, or “aniconism”? How should they be related to the Muslim heartlands?

A somewhat more self-contained second chapter illustrates the role of dress and costume as a communicator of rank and bestower of visibility within various power structures, and the capacity of dress to act as agent of cultural transformation, and as metonym for the person of the ruler. Material remains of medieval textiles are notoriously scarce, and Flood’s close reading of the pictorial and textual sources, which are not themselves hugely plentiful, crafts a model for discussing the clothing of power in medieval border-zones out of a handful of references to forms of “cultural cross-dressing,” both voluntary and imposed, that privilege a sartorial identification with hierarchical status over ethnicity. There follow studies of the early Ghurid conquest and its material manifestations (chapter 3), and the polyvalent natures of booty, tribute, and spolia (chapter 4): the latter is a virtuoso performance, again building a complex and finely nuanced series of readings from relatively sparse textual and material evidence.

The climax of the book, however, lies in the fifth chapter. This presents an extended examination of the surviving congregational mosques of the Ghurids and their unique use of recycled building materials. At the same time that Flood’s interpretations re-contextualize both the buildings and the act of their being built within a unique milieu, the academic fault line running through the middle of his material is mercilessly exposed: “In effect, the monuments have been subject to a scholarly gestalt in which Islamicists have recognized what is familiar from the central Islamic lands, while South Asianists have emphasised a relationship to the pre-conquest architectural traditions” (p. 151). Both sides have tended to find the Ghurid mosques wanting, because both have been unwilling or unable to see them as valid artefacts of more than one cultural tradition. The most striking aspect of the mosques—their use of recycled building materials—rapidly raises the issue of iconoclasm within material adaptation: a satisfying close study follows the complex variations in the methods by which pre-existing figurative images were altered for their new role within the mosque fabric, subverting the traditional construct of an undifferentiated blanket aniconism at work in the Muslim conquest of north India. This subject clearly holds particular fascination for the author, and his forthcoming book on iconoclasm in Islam will presumably extend the already expansive critical framework of these passages. While the latter part of the fifth chapter switches location to encompass Indic motifs found in Afghanistan and the ensuing questions of elite tastes and fashions for the exotic, the final chapter returns to the Qutb mosque in Delhi to concentrate on the transformations wrought upon the building by the medieval successors of the Ghurids, and the creation of cultural memory through the manipulation of architectural space.

As well as being a vastly rewarding read, this is in no small measure a demanding one. Flood’s language is careful and precise as well as exciting, and his command of technical and historical terms as well as the meta-language of theory is truly enviable, sending me to the dictionary more than once. He provides in-text definitions of the Arabic, Persian, and Sanskrit terms he uses within his arguments, but even more importantly he fully outlines the connotations of some of those terms that are often given only in received univocal translations.2 Above all, the whole book is a prolonged search for a better model for the study of cultural creation across the early Indo-Islamic cultural area than the straightforward binaries of Hindu/Muslim, conquered/conqueror, inside the Dar al-Islam/outside the boundaries, and so forth. Flood’s avowed refusal to lapse into simplified narratives, and his consistently close examination of the individual circumstances of creation, call for continued and focused attention from the reader.

A criticism, albeit a minor one, is that the sustained concentration that is required of the reader of this book, if he or she wants to stay abreast of such finely calibrated and potentially idiosyncratic models of interaction, takes a dent sometimes from the arrangement of the bibliographic references. These are set out in author-date endnotes followed by three bibliographies: primary sources, writings on history and material culture, and conceptual and theoretical texts. The division of the secondary material is justified, having produced two remarkably thoroughgoing bibliographies that will serve as foundational resources for specialists of several different disciplines; however, this arrangement also means that looking up a reference is rather disruptive to the act of reading.

In its entirety, Objects of Translation is a colossal achievement on not one but two levels. Firstly, it has definitively illuminated an area that has frequently been made to feel like a short-lived, dingy, and unsuccessful sideshow within the standard ur-narrative of Islamic art, revealing it to be as rich, complex, and worthy of study as other, more headline-grabbing areas of human creativity have been shown to be when someone with a truly inquiring mind has decided to scour them for meaning. There is no question that this will remain the standard work on medieval Indo-Islamic material culture for a long time. Secondly, the text stands as a tour de force demonstration of what can be achieved through a synthesis of the kind of nuanced interpretive thinking which takes many of its starting points from critical theory—an area in which some historians of Islamic art, particularly those working outside the United States, remain profoundly uncomfortable—and the close examination of the material itself, both physical and textual. The objects of translation have many identities and speak with many tongues, and it is nothing short of remarkable that this book is able to explicate so many of those.

Margaret S. Graves is a postdoctoral fellow of the British Institute of Persian Studies and the Institute for the Advanced Study of the Humanities, University of Edinburgh, and a research associate of the Aga Khan Museum. 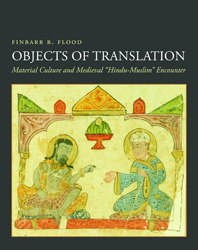