In 2004, E. Taylor Atkins found himself in the midst of a “Korea Wave” in Japan. Appearances by Bae Yong Joon, the handsome male lead of a popular Korean television drama, Winter Sonata, drew frenzied crowds of Japanese women devoted to the show and to Bae’s character. Korean pop music, or “K-pop,” was all the rage on Japanese airwaves, and Japanese fans cheered on the success of the Korean World Cup soccer team. Yet it had been only sixty years since the end of World War II, and with it the end of Japanese colonial rule over Korea. Atkins was curious how contemporary Japan could have such an unabashed and unconflicted enthusiasm for the cultural output of a country it had, not so long before, colonized and ruled with an inexorable hand.

The result of this question is the book Primitive Selves: Koreana in the Japanese Colonial Gaze, 1910–1945, in which Atkins examines “the first K-Wave,” a period of time in which the Japanese showed a similar enthusiasm for the culture of Korea. Previous scholarship on this period has characterized the Japanese colonial program to collect, curate, and describe Korean artifacts and customs as primarily a mechanism to help control the Korean peninsula.1 Atkins argues instead that it was an endeavor with multiple, contradictory impulses: curation of Koreana was used to justify Japanese rule, but was also used within Japanese culture as well, to reconcile Japanese modernity with the “nostalgic longing for a purer self that [had] been lost, yet [could] be retrieved through the consumption of Koreana” (p. 148). It has become a truism that the act of gazing upon another transforms both the viewer and the subject that is viewed. With clarity and balance, Atkins elucidates the effects of this double gaze through the various lenses of archaeology, ethnography, musicology, and performance, and how these practices not only shaped Japanese understanding of the Korean populace, but in turn also shaped the Korean populace’s self-perceptions. In doing so, Atkins also sheds light on Japanese perceptions and critiques of their own modern identity during this crucial yet under-studied period in Japan’s history.

This is delicate territory to explore, and Atkins is to be commended for his nuanced treatment. Debates over ownership and origins are and have historically been a point of contention between Japan and Korea. For instance, both Japan and Korea pride themselves on their distinctive and long-standing tradition in ceramic objects. In addition, both nations have at one point or another sought to show a formative influence on the other, as in 1957 when South Korea used a worldwide traveling exhibition titled Masterpieces of Korean Art to reclaim its cultural heritage from Japan; the U.S. exhibition catalog published by the National Gallery of Art asserted that Korea’s “priests, scholars, poets, artists, craftsmen, and administrators went forth to Japan to lay the foundations for the Buddhist culture of that younger nation” during the Japanese Kofun period of the fourth through sixth centuries.2 In the 1998 catalog for the exhibition Arts of Korea at the Metropolitan Museum of Art, this assertion was softened to allow for the possibility that cross-pollination may have occurred between the two cultures.3 But ironically, Koreans’ pride in their ceramic heritage, as Atkins and other authors such as Kim Brandt argue, may be the result of “Oriental orientalism,” a process by which Japanese connoisseurs of Korean ceramics, such as Yanagi Muneyoshi, elevated the status of those very same objects in the eyes of the Korean populace while simultaneously using and explicating those objects in a way that could justify colonial rule.

It is a fundamental irony that the very objects used to tout South Korean nationhood in that 1957 exhibition first came to light via the careful archaeological efforts of Japanese scholars during the colonial period. Between 1916 and 1921, Japan conducted more than 110 archaeological excavations throughout Korea, in addition to a proliferation of field surveys and ethnographic reports on the subject of Koreans. These excavations were hardly plunder-and-pillage operations; the meticulous record keeping from Sekino Tadashi’s field reports and photographs resulted in a lavish, fifteen-volume report published over a period of twenty years.4 Certainly, the Japanese government’s sustained engagement with the cultural heritage of the Korean peninsula after its annex in 1910 has been viewed by scholars as anything but a neutral enterprise, but Atkins seeks a nuanced interpretation of Japanese intent by focusing on the “Janus-faced nature” of these enterprises, expressed by the dichotomous desire both to “preserve and to suppress indications of Korean difference” (p. 105). While the official support for the archeology and ethnography of Korea offered by the Japanese Government-General of Choson was predicated on the belief that the “impulse to study and comprehend, document and record, preserve and exhibit distinctively Korean cultural traits” would lead to better management and control of the peninsula, Atkins argues that other Japanese constituencies interested in the cultural production of Koreana had reasons that were sometimes complementary to this official purpose, but oftentimes not (p. 15).

It is the desire to explicate and resolve this impulse to control and suppress Korean nationalism while simultaneously yearning with nostalgia for all things Korean that is at the heart of Atkins’s enterprise. First, Atkins argues that Japanese interest in Korea was not solely about suppression, surveillance, and conformation: within Japanese imperial culture, there was space for the assertion of Koreanness on the part of Koreans, and at the same time, Koreana held considerable appeal for scholars, hobbyists, and consumers within Japan. Atkins uses various examples to illustrate that reductive accounts of Korean resistance and Japanese suppression do not reflect the complex and nuanced relationship between Korea and Japan during this period. Second, Atkins explains that Koreana appealed to the broader Japanese audience because it offered a means by which to meditate on their own modern identity. Here, Atkins argues that the prevailing anthropological wisdom of the time saw Japanese and Korean culture as connected in origin; Japan had subsequently “evolved” into modernity, but it could look at its Korean colony as a nostalgic reminder of what had been lost to the past. Finally, in an argument that threads its way throughout the book, Atkins posits that the colonial experience is one that fundamentally transforms both the colonizer and the colonized (p. 3). In this vein, Atkins situates his work within the discourse of “new imperial studies” wherein scholars are “as attentive to the cultural impact of the empire on imperial states as they are to the effects of imperial policies on colonized peoples” (p. 6).

Despite offering, on the whole, a balanced and compelling account of this difficult period, Primitive Selves stumbles at times, overworking some of the evidence to support its argument. For instance, in a passage on the work of Yanagi Muneyoshi, a key theorist behind the Mingei movement in Japan and an ardent collector of Korean ceramics, Atkins writes,

Still, there remains a tendency, even in the most dispassionate accounts, to characterize Japanese attitudes towards Koreans and their culture as insensitive at best, and steadily scornful and repressive at worst. . . . Few scholars in the humanities and social sciences don’t enjoy sticking it to The Man. This habit is clearly beneficial to humanity. But it also breeds a cynicism that can distort historical perspective. . . . It causes us to question the sincerity of someone like Yanagi Muneyoshi, who was profoundly moved by the “beauty of the [Korean] line.” . . . We need not endorse Japan’s colonial rule of Korea to take seriously the intellectual interest, aesthetic pleasure, and genuine affection for Koreana that a respectable number of Japanese exhibited. (p. 48)

That cynicism alone “causes us to question the sincerity” of Yanagi is a strange assertion. There is no doubt that Yanagi was “profoundly moved” by Korean art, but here Atkins characterizes Yanagi’s interest in the same reductive manner for which he earlier criticizes past nationalist historiographers. Certainly Yanagi was a strong advocate for the Korean folk arts, but it is not undue cynicism to suggest that his advocacy also resided in a firm paternalistic belief that Korean ceramics were “superior” to those of the Japanese because of their simple, childlike nature. When Yanagi praises Korean ceramics in The Unknown Craftsman, it is for their naturalness born out of chance, not choice.5 Yanagi views Korean ceramics as “an uneventful, natural outcome of the people’s state of mind, free from dualistic, man-made rules,”6 a statement that lends support to Atkins’s overall argument that Yanagi, like so many other Japanese intellectuals, viewed Koreana as the embodiment of life before modernity, of a simpler time and a simpler people. Thus, it is puzzling to have Atkins hold up Yanagi as a victim of recent scholars’ desire to “stick it to The Man,” particularly since Yanagi seems in this case to better serve Atkins’s stronger argument, that the Japanese colonial gaze upon Korea left room for genuine aesthetic engagement while simultaneously shoring up Japanese modern identity. With modernity came nostalgia and a sense of loss, but nostalgia also served as a mechanism for paternalism and feelings of superiority. This idea is reinforced by characterizations of Korean cultural artifacts as manifestations of an unconscious “natural” process, simply born into being, as opposed to the conscious intellectual craft of Yanagi’s fellow Japanese artists.

In recent years, historians of Korea have focused their attention on this difficult thirty-five-year period with impressive results. The impact and effects of colonialism are multifaceted and complex, and it takes a certain amount of courage to shine a light on this period for historians of both Japan and Korea. Atkins applauds the work of historians such as Andre Schmid, who in 2000 criticized the absence of historical inquiry into the colonial period by Japanese historians, suggesting that the impulse to ignore was in some ways a willful replication of Japan’s imperial past.7 Likewise, Atkins has praise for the historian Hyung Il Pai, who had the audacity to suggest, in direct challenge to “Korean nationalist historiographies,” that Japanese archaeologists and scholars had been “genuinely dedicated, interested, and fascinated by Korea’s past,” and had not been pillaging plunderers, as they were so often characterized.8 And yet, as Atkins acknowledges, it is one thing for Schmid, a historian of Korea, to chide his Japanese counterparts for their disinterest in an important period in their modern history, or for Pai to suggest to her fellow Korean archaeologists that their understanding of Korea’s early period has been enriched in many ways by the Japanese-led excavations of the 1930s. It is another thing altogether for a historian of Japan to suggest that the imperial project of colonialism as it was practiced by the Japanese was not solely one of surveillance and control, and that some in the Japanese metropole had earnest intentions toward the preservation and collection of Korea’s cultural heritage.

Atkins makes clear that he is no apologist for imperialism, and his work speaks to the need to carefully weigh the intent and impact of the Japanese gaze upon the Korean populace. That he must be so careful is testament to the truly difficult task that faces historians of this period. And so I applaud Atkins for providing a largely successful analysis of the Japanese colonial gaze, which fell upon the Korean populace and then turned inwards, comparing what it saw in Korea to ideals of Japanese identity and Japanese modernity. And despite Atkins’s protests to the contrary (in his introduction he suggests that the impact of his work will be felt primarily within Japanese studies), this work is not limited to its Japanese context but contributes in a significant way to both Korean and global postcolonial studies.

Christine Y. Hahn is an assistant professor in the Department of Art and Art History at Kalamazoo College. She is currently at work on a book project examining Korean artists and their relationship to national identity, uses of the historical past, and connection to global modernity in the mid-twentieth century. 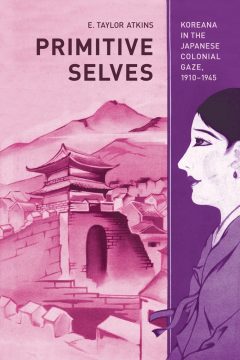