The Luminous and the Grey
Reviewed by Jo Applin

For the 1995–96 soccer season, Manchester United launched a new all-grey road uniform with disastrous results. When halftime was called on a losing match against Southampton, Manchester manager Alex Ferguson had the team change back into a brightly colored blue-and-white kit. For Ferguson this was, infamously, not a matter of superstition but rather visibility; the grey, he alleged, rendered the players invisible to one another on the pitch. The team rallied to score one goal in the second half, but they did not win a single game in the grey uniform and it was dropped before the season ended. Grey is the color of losers, not winners. It is dull, pessimistic, and uninteresting (in fact it is barely a color, and it is more often described as a tone or shade). Whether describing moods, people, or things, grey, unlike every other color, is used in unanimously negative terms. David Batchelor addresses the apparent gulf between these perceptions in his recent book The Luminous and the Grey. It is a pendant volume to the writer and artist’s Chromophobia from 2008, and, like that book, offers a rich meditation on color as both an idea and a material substance.1

In recent years color has received renewed interdisciplinary attention from a range of historians, anthropologists, scientists, psychologists, and sociologists. Since the Renaissance paragone between colore and disegno, the relative value and status of color, as either mere frippery or serious subject for consideration, have been debated by theorists and practitioners alike. A small sampling of recent exhibitions and books about color might include the Museum of Modern Art, New York’s 2008 exhibition Color Chart: Reinventing Color from 1950 to Today, which tracked the various ways in which artists including Batchelor have worked with color since midcentury, as well as the National Gallery in London exhibition Making Colour (2014), which explored the history, invention, and uses of color in painting between the early Renaissance and impressionism from a scientific perspective.2 Meanwhile, Natasha Eaton’s recent book, Colour, Art and Empire: Visual Culture and the Nomadism of Representation (2014), explores the politics of pigment through a thoughtfully theorized account of the various “entanglements” of color and colonialism, while Chris Horrocks’s edited volume Cultures of Colour (2012) emphasizes the interdisciplinary nature of color studies in recent years, drawing together an impressive mixture of essays by art historians, sociologists, anthropologists, and film scholars.3

The title of Batchelor’s book is a gloss on Ludwig Wittgenstein’s statement in his Remarks on Colour that “whatever looks luminous does not look grey”’ (p. 26). Rather than follow Wittgenstein’s either/or formulation, Batchelor argues that it is impossible to think one without the other. His primary concern is not to pin color down or to fix it in place by naming it as such, but rather to track the many “ambiguities” and “thresholds” that color inhabits and produces in daily life so that we might notice the elusiveness of color as a “thing.” Batchelor wants to attend to “the places, actual and imagined, where color enters and leaves, where it begins and ends, and begins again, and ends again, in an endless play of light and shadow” (p. 17).

Color, according to Batchelor, has received a bad reputation in the West, particularly in those dominant accounts of modernism in which the monochrome scale of black, white, and grey prevail. While Chromophobia argued that a “chromophobic” attitude permeates Western cultural and intellectual thought, The Luminous and the Grey reveals how closely hewed to one another color and its absence are. From the study of optics and industrial chemistry to the ways in which color has been variously disavowed, ridiculed, and radically reclaimed—from pop art’s reveling in bright color to minimalism’s embrace of ready-made paint colors and artificial light and plastics—Batchelor tracks the fortunes and failings of color across the modern period.

Batchelor’s work is distinctive for his refusal to approach the topic from one specific disciplinary perspective, writing instead from his unique dual position as both a writer and a successful artist who has worked with and thought deeply about color for many years. If the theme of whiteness and the absence, and accompanying fear, of color preoccupied the author of Chromophobia, his attention turns in the current book to the chromophilic in modern art and culture. The Luminous and the Grey is about color seeping back into the picture in all its dazzling and complex shapes and forms; one case in point is Batchelor’s engaging meditation on the abstract nature of a grey manhole cover. Across three chapters Batchelor weaves a route through the material objects of everyday life—both natural and artificial—upon which color impinges. The book’s range of references is far-reaching, drawing on examples from art history such as Yves Klein’s writing on color, to the transformative moment when color bursts onto the screen in the 1939 film The Wizard of Oz.

Batchelor traces the “colour revolution” to 1850 and the accidental discovery of synthetic color by William Perkin, an eighteen-year-old chemist. He had been experimenting on coal tar residue to other ends when he inadvertently produced his first color, mauve. Within years an “entire synthetic rainbow” had been produced using Perkin’s method (p. 36). Synthetic dyes were far cheaper than animal, vegetable, and mineral colors, with corresponding and far-reaching effects for the material culture of Victorian Britain: in 1858 Queen Victoria wore mauve to her daughter’s wedding. Such was the popularity of Perkin’s mauve in the fashion industry that its appearance on the streets of Paris and London was regularly satirized in the pages of Punch. The new synthetic dyes were not universally admired, however. William Morris, who knew a thing or two about design, commented that the main problem with the new dyes was that “every one of these colours is hideous” (p. 39). The book also contains imaginative readings of the ways color is explored in writing by Morris, Aldous Huxley, and Walter Benjamin, whose most powerful writings were, Batchelor notes, often written in the register of the grey and “nocturnal” (p. 60).

In considering the aesthetic, political, and powerfully emotive status of the non-color that is grey, Batchelor offers a series of surprising, sometimes unlikely, and frequently enjoyable analyses of instances where color has been foregrounded. One example is his account of the 1980s British satirical puppet show Spitting Image and its rendering of the UK prime minister John Major. Week after week, the Major puppet appeared as a character composed entirely of shades of deathly dull grey; to appear as grey and boring was surely worse for Major’s poll ratings than the boorish, colorful, and utterly vivid caricatures his peers received at the puppeteers’ hands. At another point, and in a different mode entirely, Batchelor describes Cormac McCarthy’s post-apocalyptic novel The Road and its absence of color, suggesting that the book offers an experience of the world in a state of becoming grey, as both life and color drain away.

Batchelor’s text delights in case studies drawn from literature, film, art, design, and everyday life, where “black” becomes “dark” becomes “grey” becomes “nocturnal,” and the “luminous” can serve as a description of an ordinary fluorescent light bulb as much as it can a transcendent and experiential mode of living in the world. Batchelor charts the lurch between the luminous and the grey, the ordinary and the extraordinary. The book ends with a description of the imagined reconciliation of the apparently polar registers of the luminous and the grey in the final scenes of Andrei Tarkovsky’s Andrei Rublev (1966). Black-and-white film stock gives way to shots of pure, vivid color, before that too fades into a silent closing shot that returns us to an achromatic rendering of the “living world” figured in neither black-and-white nor vivid color but an altogether softer, “humane” and luminous “panorama of grey” (p. 96).

Batchelor is an exhilarating writer to read and think with; he wears his research and scholarship lightly, while never belying the seriousness of his endeavor. Across its ninety or so pages, The Luminous and the Grey presents color as a mobile and moving category of experience. It is a thing felt as well as seen, made, and remembered. It is fluid and flimsy even as it floods our senses and the world in its various forms, from colored plastics to flashing LEDs. If in recent years a “neuroscientific turn” in visual studies has sought to determine how the brain functions in relation to the production and reception of color in art, Batchelor’s book is important because it reminds us of the singularly subjective and wholly unfixed, fluctuating, and entirely unscientific nature of our experiences with color, which determine, among other things, our responses to artworks and objects. For in those moments color and non-color—at its most luminous or grey—tell us something important about our relationship to the world of things.

Jo Applin is senior lecturer in modern and contemporary art in the Department of History of Art at the University of York in the UK. 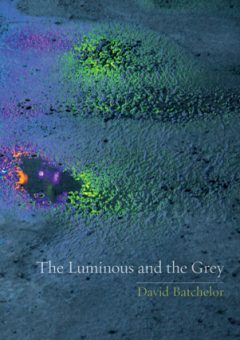