The Materiality of Color: The Production, Circulation, and Application of Dyes and Pigments, 1400–1800
Reviewed by Pamela H. Smith

A decade ago, the words color and meaning could often be found in titles of works by art historians; the more frequent pairing today is color and materiality. Thinking about the meanings attached to color in different places and times has become second nature, but thinking about materiality somehow seems more problematic, perhaps because color is understood by natural scientists today as the result of an interaction between refracted light, surface structure, and the observer—not as a material thing at all. What, then, might be considered the materiality of color?

In the volume under review, various dimensions of materiality are examined: cultural and social meanings of colors, the production and exchange of colored materials and pigments, and the making of colored objects. This investigation of the materiality of color is sure to attract attention just now in art history and the history of science. In both art and science, the human engagement with materials is central, but until fairly recently, scholars have largely narrated the histories of these disciplines as stories of conceptual change and intellectual activity. In art history, in accord with Aristotelian hierarchies, the important components of artwork were considered to be form, structure, and design—rather than matter. Thus disegno was more important as a subject of study than pigments. Moreover, nineteenth- and early-twentieth-century modernism made form a more important category than color in sculpture and architecture. One has only to think of the modernist restoration campaigns carried out in medieval churches that stripped them back to some imagined original state, doing away with their colorful wall paintings and their polychromed sculpture. The “restrained” and “severe” look of ancient sculpture (note those disciplining descriptive terms), whose austere colorlessness was imitated in the eighteenth and nineteenth centuries, has now been overturned in the wake of intensive conservatorial examination of remaining pigment traces. The gaudy and garish colors of the “Orient” as opposed to the restraint of Greek and Roman antiquity is, as Vanessa Alayrac-Fielding’s essay in this volume shows, a result of impulses of distinction and stratification, both within European society and between “West” and “East.” With the incursions of “material culture” and social and economic history into art history and of the (now not so) “new” cultural history into the history of science, as well as attention to issues of power, distinction, and “taste,” the pendulum in the writing of history in the last generation has swung decisively in the direction of the material, the bodily, and the emotions.

The Materiality of Color offers a sampling of perspectives that exemplify this trend. Some of the essays simply point out how much more we see if we pay attention to color. For example, in studying the colored slate tombstones of early New England, attending to the property of the stone to reflect the colors of the sky reveals potential depths of meanings to the epitaphs. The first section of the volume contains essays on the social or cultural values of color, like Jason D. LaFountain’s discussion of tombstone color and spirituality. In the essay mentioned above, Alayrac-Fielding charts the transformation of taste in British culture from an avid desire for colorful chinoiserie to a view that the “gaudy” and “feminine” taste exhibited in such import ware was essentially Chinese when, in reality, this type of porcelain emerged in response to the demands of a European market and decidedly not from elite Chinese hierarchies of taste. Molly Harvour Bassett and Jeanette Favrot Peterson likewise present a useful contrast: they show that in the pre-colonial Aztec world, color seems to have been regarded as an essential component of body that constituted form rather than as an element antithetical to form. Mitchell M. Harris’s wonderful examination of the properties of the ink used to “body forth” the ideas of Shakespeare caused me to ponder the ways early modern thinkers, consumed with the struggle of body and spirit on a religious plane, were beleaguered by the same issues of subject and object, body and mind, that have taken up so much scholarly attention recently.

From the cultural meanings of color, the volume moves to the economic dimensions of color: to the shifts in the production and trade of cochineal in Mexico (in an essay by Jeremy Baskes), to the varying role of the British East India Company in the growing of indigo in Madras and Bengal (Padmini Tolat Balaram’s essay), to the development of indigo dyes on the slave plantations of North America with the input of slaves, not just their labor but their crucial innovations in the production process (Andrea Feeser’s essay). Sarah Lowengard, in her essay, shows that over the course of the seventeenth and eighteenth centuries, Prussian blue changed from commodity to an analytical tool and an object of science.

The remaining chapters all more or less center on the production of colored things, ranging from medieval Middle Eastern colored glass bracelets that perhaps denoted religious community and played a prophylactic medical role to court wear in the Principality of Transylvania between 1613 and 1630 (Prince Gabriel Bethlen preferred vibrant reds and blues over the blacks, whites, and pastels of his second wife, Catherine of Brandenburg). Two fascinating essays integrate the meaning and the making of color. The first, by Richard Blunt, is on the making and meaning of cosmetics for blackface performances in early modern England. The second, by Amy Buono, is on Tupi tapirage—apparently an indigenous practice of harvesting colored feathers from living parrots and macaws. The Amazonians both collected them in their original brilliant colors and cultivated colors by painting birds’ bodies with a variety of substances (toad blood, pink river dolphin fat, crocodile eggs) to traumatize the feather follicles, causing the growth of feathers with different colors (yellow instead of red). One has to wonder what processes of human-animal interaction and experimentation led to this practice.

In sum, this volume introduces its readers to several dimensions of color in a variety of places and in connection with a variety of artifacts, focusing on the years between 1400 and 1800. The brief sightings of sixteen different facets of the material existence of color are tantalizing but, in a few cases, leave the reader with a desire for a more analytical approach. An interdisciplinary group of scholars and practitioners contributed, but the history of science could advantageously have been brought more fully to bear on the problems treated here—the work of Karin Leonhard is particularly relevant. Two useful aspects of this volume should be highlighted: first, its appendixes of primary sources—including recipes for blackface cosmetics and Prussian blue—and, second, the attempts on the part of a few authors to reconstruct the material knowledge of earlier times through experimental reenactment and the remaking of recipes.

Pamela H. Smith is professor in the department of history at Columbia University. 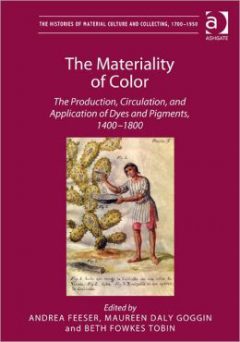