This review first appeared in artUS and is reprinted here with permission from the publisher.

Charles LeDray works as a tailor, shirtmaker, and hatter, but in impossibly small sizes, bigger than for a doll, but smaller than for a child. In 1994, LeDray contributed to Guys Who Sew (University Art Museum, University of California, Santa Barbara), its title playing on expectations that wielding a needle is gender bending. Yet those who appropriate the stitch as subversive, claiming it as female, feminine, effeminate, and therefore also the province of gay men, ignore the historical length of the masculine needle. All kinds of men—whatever their sexual preference—have always sewn. Male embroiderers dominated the production of opus anglicanum until the fourteenth century, making the most highly prized ecclesiastical vestments in medieval Europe. Well into the nineteenth century, mariners were dab hands with a needle. Fiber arts may not have enjoyed the status of bronze and marble until recently, yet LeDray’s use of textiles is unexceptionable. He has been doing it for years, but so have many others. It’s what he does with his thread that counts.

LeDray questions male identity through the poignant miniaturization of fictively personalized clothing that once felt the spectral warmth of imaginary bodies. Now they hang on tailors’ forms, hooks on the wall, or clothes hangers. These ensembles exemplify class-constrained social roles—heating engineer (Charly/Chas, 1999–2002, Collection of Eileen and Michael Cohen), enlisted man (Army, Navy, Air Force, Marines, 1993, private collection, Houston), blue-collar father (World’s Greatest Dad, 1993, Cartin Collection). Each is individualized by its implied wearer, to the extent permitted by social convention, with personal embellishments, mostly hand-sewn, miniature versions of common machine-embroidered patches. Other sets of clothing have met disaster. Little jackets, shirts, and ties hang on their hangers, shredded below midchest (Torn Suit, 1997–1999, Collection of Eileen Harris Norton) or cleanly voided in the chest and abdomen (Hole, 1998, Cartin Collection). These imply acts of violence such as might have destroyed the contained self both physically and psychologically.

Human bone is another of LeDray’s favorite materials. Among his works in this medium are the delicate, barred Cricket Cage (2002, private collection, United Kingdom) and the miniature Orrery, after an eighteenth-century model of the solar system set within a Victorian glass bell jar (1997, private collection). Whereas human bodies are absent from LeDray’s clothes, their skeletal fragments are only too present in these pieces, reworked into ironic evocations of human mutability.

The exhibition, though full of intriguing pieces in ceramic and book form as well as fabric and bone, kicks into an altogether higher gear with LeDray’s installation Mens Suits (2006–2009, commissioned for Artangel, London). First shown in a disused fire station in London in 2009, this ambitious work demonstrates the value to an artist of collaborating with a top-flight curator. James Lingwood has been co-director since 1992 of Artangel, which commissions works for specific sites and temporarily available spaces. Lingwood is one of the most rigorous, diligent, demanding, and imaginative contemporary curators working today. His supportive hand seems subtly omnipresent in Mens Suits, gently pushing the artist to be ever more rigorous in conception to match his thoroughness of execution. The result is remarkable.

In the installation, we see three miniature clothing-store interiors, each shopworn and shabby. There are no walls, but false ceilings hang above and as part of each scene, their recessed strip lights providing the only illumination. Viewers gaze down not only on the unpeopled interiors but on layers of dust and small debris atop the ceiling panels. One tableau presents two packed circular clothes racks, their Plexiglas tops covered in dust, and a display table bearing displaced folded clothing. A second scene shows a tailor’s dummy, the clothes on it incomplete and distressingly damaged. Beside it stands a circular table with a sunburst array of miniature ties, oddly rumpled at the center. The third tableau shows what might be an untidy backroom filled with stuffed laundry bags, mobile clothes racks with tangled hangers, wheeled hampers full of crumpled garments, and other clothing hanging on a stepladder and lying on forklift pallets and an ironing board. The entire effect is bewildering, for we cannot account rationally for the strange discrepancies—the damaged clothing and apparently secondhand or salvaged garments—among these instances of tailoring. Just what might be the nature of circulation of the goods on offer? Identity, signaled by creased clothing, has been snipped, sewn, and crumpled into uncertainty and instability.

While Mens Suits presents a triumph of the uncanny as it applies to masculinity, a far more modest piece also captures the male fear of failing to fulfill a prescribed social gender role. Catcher’s Vest (2005–2006, Cartin Collection) features a fourteen-inch-high, old-fashioned padded baseball catcher’s vest suspended with a facemask from a soiled, wooden clothes hanger. The words ascribed to one of the most celebrated men ever to wear such an outfit might also be said of the entire exhibition: “You can observe a lot by watching” (Yogi Berra). 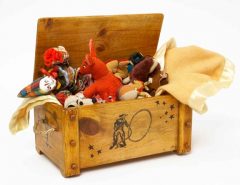