As I write this, activists in the West Bank are instructing protesters in Ferguson, Missouri, via social media, on the best ways to counter the effects of tear gas. Milk or Coke in particular prove much more effective than water for washing the face and eyes. Visitors to the V&A this fall can expect to receive similar advice, drawn from antiausterity protests last year in Greece (where an antacid-water solution was preferred), alongside instructions for how to make an improvised gas mask from a dismembered water bottle. It’s an ingenious and elegant solution to a pressing threat, but not the kind of thing made with either preservation or display in mind. Tracking the ways in which a diverse material culture of protest might “out-design” authority, Disobedient Objects turns to these everyday inventions, easily acquired and repurposed for ad hoc tactical ends.

The eclectic display fills a single room at the V&A. It is at once sparse and crowded, homemade and elaborately worked, and it’s sometimes difficult to separate the design of the exhibition from the objects it contains. Banners and flags hanging above one’s head are reproduced in miniature on placards at eye level, and the space is occupied by a mélange of untreated particleboard and scaffolding. The cacophonous signage and the packed uprights of the poles conjure the visual intensity and crush of the demo, while the scaffolding nods to the precarious tripods used by road protesters and other activists to suspend their bodies in the way of those who would remove them. The title of the show is traced in lime-green cable ties attached to an upturned fence. It’s all a little self-conscious, but the display helps animate some otherwise recalcitrant things. Entering the exhibition, one passes through a doorway on which images of barricades past and present are inscribed in outline against a black background.

Despite this allusion to modernity’s founding crises, the objects of historical revolutions are largely sidestepped in favor of more recent examples, many of which, such as a Palestinian child’s shoelace refashioned as a slingshot, gesture urgently to ongoing conflicts. In this company, the first object in the exhibition, a teacup and saucer emblazoned with the logo of the Suffragette movement, seems a little lonely, as the focus of the exhibition is primarily on objects made since the 1970s. Disobedient Objects succeeds where it points to the contemporary vitality and complex materiality of attempts to speak to power, but is rather halfhearted when it tries to situate these experiments within a longer historical trajectory.

The exhibition is divided roughly into two halves. The first addresses some key modalities of protest, such as direct action, solidarity, and world making, while the second illustrates the diversity of forms global protest might take. The objects themselves are a motley assortment. There are things both folkish and highly personal. Flimsy handkerchiefs sewn by mothers of disappeared Mexican children and stenciled spray-painted portraits of martyred Syrian activists mark a shift from domestic to public space, and the exhibition acknowledges throughout the ways in which gender and socioeconomic factors determine one’s means to protest. Other works deploy more up-to-date technologies: Floodnet’s online disturbance, for example, or Molleindustria’s Phone Story computer game, which offers players the chance to force children to mine coltan in the Congo, dispose of electronic waste in Pakistan, and enact other harmful aspects of smartphone manufacture. If the materiality of the digital is foregrounded in these examples, a video documenting artists Carrie Reichardt and Nick Reynolds making a death mask of John Joe “Ash” Amador, a prisoner executed by the state of Texas, accentuates the body as a site of resistance. Reichardt, whose mosaic assemblages flank the entrance to the museum on Cromwell Road, corresponded with Amador for some years and witnessed his execution. The film of the very recently dead Amador receiving a touch denied him for many years is simply devastating.

Works such as this one, or the feminist institutional critique of the Guerilla Girls (represented, a little oddly, by mannequins), are made by those who identify as artists. These works arguably have greater potential for more complex forms of “disobedience” than the overtly utilitarian objects on display, which are perhaps rather less equipped with agency than the show’s title would have us believe. In taking the title literally, it is precisely the ease with which mundane items might be reshaped and manipulated to radical ends—their obedience, in fact—that renders them effective. Indeed, it is not clear what, exactly, an “obedient” object might be. Yet the choice of the title “Disobedient Objects,” as the curators note in their introductory catalogue essay, is conceived less as an attempt to fix a canon or demarcate a new disciplinary frame than as an opportunity to stimulate debate and highlight absences, failures, and contingencies, staging “an evocative proposition or an invitation rather than a typology or closed concept” (p. 11). The exhibition’s resistance to conventional aesthetic categories, and the curators’ unwillingness to limit their subject to institutionally valorized participatory practices or “activist art,” are refreshing, although one wonders if this celebratory open-endedness and representation of disobedience’s diverse materialities might come at the cost of a more focused political aesthetics. One passes from Common Practice’s model for an inflatable general assembly to protect protesters at Occupy Wall Street to the Institute for Applied Autonomy’s dinky protest robot designed to spray-paint slogans on the ground, a DIY harbinger and prescient reclaiming of the drones that survey our cities and battlefields. Act-Up posters, antiapartheid badges, and the red squares of the 2012 Québec student protests jostle with intricate pendants made in prison by members of the Angola 3, while scrappy if memorable signs (Coral Stoakes’s 2011 “I wish my boyfriend was as dirty as your policies”) are followed by remarkable subversions of paper money. A one-kyat banknote from Myanmar features the portrait of General Aung San, but push a button and the note is backlit to reveal a watermark representing his daughter Aung San Suu Kyi, held under house arrest after her 1990 election victory. It’s a reminder that objects made explicitly for resistance operate in dialogue with things and practices designed to maintain order, many of which—“kettling,” for instance—are also described in densely material terms.

An example of a “lock-on”—a simple welded V of metal pipe used by protesters to secure themselves to fences, trees, and other anchored or heavy objects—is staged to allow visitors to enter their own arms into the device, as a video of supine protesters being teargased plays. The bravery needed to put one’s body in the way of batons or heavy machinery and the queasy shock of steel on flesh are brought home effectively, and it’s surprisingly moving. Disobedient Objects subverts in this way the interactivity demanded by contemporary museum design. There are things to prod, games to play, films to watch, but it’s less about consumer-oriented “visitor experience” and more of an opportunity to participate. Further on, tear-off sheets on the wall offer a take-home guide on how to construct a bike bloc, a lock-on, or a pamphlet bomb, echoing wittily the stop-and-search bust cards and squatters’ handbooks that make an appearance earlier in the show.

There is, thankfully, a healthy vein of humor running through the exhibition. In a wonderfully deflationary gesture rich in historical knowing, Eclectic Electric’s giant inflatable silver cobblestones from Barcelona and Berlin reconfigure Andy Warhol’s silver clouds as the materials of popular revolt. Book blocs from Italy, New York, and London see covers of works by Carla Lonzi, Ivan Illich, or Oscar Wilde transformed into makeshift shields. The Barbie Liberation Organisation swaps the voice boxes of the eponymous doll with those of her male counterparts, before returning them to shops to be bought. “Murdoch fucks donkeys!” blurts the carnivalesque headline on a copy of the Sunprinted during the newspaper workers’ strike at Wapping in 1986. Throughout the exhibition the voices of the makers and original users of these objects shape our response in the form of texts accompanying each item. Sometimes these statements are banal, often they are tersely descriptive—deliberately so—but the overall effect forces an engagement with the lived values that attend these objects in a manner that could have been coy, but serves instead to vivify the objects in the museum space.

Any exhibition covering this kind of territory risks succumbing to one of a few pitfalls. Stress the active role of the objects in ongoing struggle and the show might come across as po-faced or preachy, turning urgent political critique into weak posturing. Push too far in the other direction and the objects on display become subsumed fully into the logic of the museum, smoothing out their political and material differences and losing whatever it was that made them powerful in the first place. Disobedient Objects, and the catalogue that accompanies the show, remain sensitive to these issues, taking the unusual step of highlighting the potentially nostalgic or deadening effects of preservation. A final section of the exhibition includes a blank space on the wall to accommodate the protest objects of the future. It’s a cliché, however well intentioned, and falls rather flat. This compelling and timely exhibition does enough already to convince that the things we use to say no are things worthy of our attention.

Richard Taws is reader in the history of art at University College London. 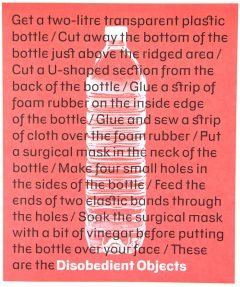