Of all the designed spaces that adults in the developed urban world occupy on a regular basis, the office has probably received less attention from architecture and design historians than any other. Adrian Forty made a good start in his pioneering Objects of Desire (1986), but that was twenty-five years ago. In the interim, I can recall only Mechanical Brides, Ellen Lupton’s 1993 study of the interaction of women and machines, which devoted significant attention to office equipment. Sociologists and economic historians have certainly taken the office seriously, and, for different reasons, it looms large on the agenda of management consultants. The future of the “paperless,” “portable,” “networked” office has also generated much speculation, as seen in the exhibition Workspace held at the Museum of Modern Art in 2001, as well as a host of newspaper and magazine articles. However, the historical background to the design, furnishings, and equipment–to say nothing of the less formal rearrangement, personalization, and subversion–of the “efficient” office seems to be outside the research interests of most historians of the interior.

As most people reading this review will no doubt recognize, we spend more time in the office than in any other room, with the possible exception of the bedroom. It is something of a relief, therefore, to come across an exhibition that raises many historical questions, and does so with an angle that is both unexpected and informative. How Secretaries Changed the 20th-Century Office could easily have been just a survey of social change and evolving patterns of work, but instead it set out to demonstrate the formative role of female clerical workers in shaping this traditionally masculine environment, while bringing the subject into clearer focus for historians of design. Above all, it brought the material culture of the office into the foreground, employing a range of artifacts including office furniture, equipment, clothing, stationery, magazines, and printed ephemera to tell a complex and nuanced story. This was further enhanced by an oral history project that communicated the texture of lived experience to the objects on display.

Throughout the twentieth century, educated women all over the United States were drawn into offices to work as “typewriter girls,” stenographers, and secretaries—women’s previous role had been generally restricted to cleaning such premises. This brought about a profound shift in social and working relations as the new workforce negotiated a range of traditional obstacles, especially of class, gender, and race. Not all of these barriers were breached—at least not immediately—but the pressures of commercial expansion coupled with entrenched social constraints gave rise to some curious patterns regarding what was acceptable behavior for men and women of similar class backgrounds working in close proximity, often in spaces that were at least partly private. The tension at the heart of such professional and personal interaction was quickly recognized by authors and cartoonists, and romantic entanglements in the office became a staple of both popular fiction and visual imagery, including “naughty” or downright lewd postcards and photographs.

By the 1930s, the office had become a popular setting for Hollywood comedies and melodramas, giving rise to the stereotype of the office siren or “sexy secretary” eager to ensnare the vulnerable married man. Jean Harlow was a classic of this type. From the moment she arrives at the office in Red Headed Woman (1932), it is clear that her primary aim is to pursue her married boss. The drama that unfolds strained the limits of respectability and, in fact, was instrumental in the enactment of the Hays Code, which governed moral content in films. This did little to dampen enthusiasm for the genre, however. The sexual politics of the office have continued to be a mainstay of popular film and television, not least in the recent series Mad Men, which enjoys great appeal among an educated demographic because of its loving recreation of interiors, clothing, hairstyles, and social mores of the early 1960s.

The curators of the exhibition, Midori Green and Kate Solomonson of the University of Minnesota, recognized the importance of this fictive world, and their exhibition embraced the representation of office workers in film, television, and advertisements, as well as documentary photographs of female office workers at different times between 1900 and the 1970s. This juxtaposition raised some striking contrasts. Alongside glamorous studio photographs of film stars, one could also see regimented rows of women typists, their desks equally spaced as if by a machine, stretching back into the gloom of cavernous work halls. A photograph of the interior of Frank Lloyd Wright’s Johnson Wax building (1939) is a sharp reminder not so much of the architect’s sense of space and form but of the economic imperatives that brought women into the workforce in the first place. Taylorist and Fordist principles were applied to the typing pool as much as the production line to ensure that the maximum was extracted from employees by rendering the workplace as efficient as the machines they were operating.

The gap between popular representations of the office in the mass media and firsthand experience of office work was more fully revealed by the presence of actual items of office equipment, furniture, clothes, and printed matter. An early “Ediphone” dictating machine, IBM typewriters, a secretary’s desk from the 1940s, and clothing worn in different periods between 1900 and the 1970s served to remind the observer of the gap between experience and representation. The subtitle of the exhibition–Design, Image, and Culture—was well chosen, because the show opened up several lines of thought while following a broadly chronological format. The ergonomics of office work for women was touched upon in relation to both furniture design and the exterior casings of manually operated machinery, as was the need for comfortable, but above all respectable, clothing. A 1950s woman’s suit made of easy-care and wrinkle-resistant rayon (from the Goldstein Museum’s collection) was juxtaposed with a compact steel Mode-Maker desk designed by Raymond Loewy in 1948. The desk’s rounded corners helped to save bruised hips and snagged stockings.

The issue of respectability was of particular importance since many early women office workers were unmarried women from good families. While the prospects of finding a suitable husband may have been a dominant feature of popular entertainment, in reality the immediate needs of preserving social status and reputation were paramount. The exhibition also highlighted the office’s role as both a barometer of social change with regard to women and an engine of that change. Office work gave women many opportunities for new experiences, increased earning power, and independence from their parents and families, but it also carved out a realm where that work was undervalued and underpaid. Only after World War II, as demand for secretaries increased alongside the explosive growth of U.S. corporations, were secretaries able to take some control over their working environments and to develop patterns of working that diverged from the expectations of their male bosses and co-workers–and designers. For example, the exhibition featured a chair designed by a secretary, although this could hardly be said to mark a change in the overall relationship between designer, client, and end user.

If tracking the relationship between design and workplace management were the main interest of the exhibition, we could have learned something about the impact of new management theories, such as the German model of the “office landscape,” which encouraged more fluid and informal arrangements. These are fundamental issues that are often overlooked when historians focus on individual pieces of furniture and gadgetry. More subtle and elusive, however, was the curious interplay between women’s attempts to personalize the office environment and the corresponding tendency among (presumably male) product designers to feminize office equipment with smoother finishes and curvaceous styling. As the typewriter became more efficient and more exclusively the workstation of women, its casing became more bulbous–less dangerous, but also more sexualized. There is a dialectic here that is about more than just the hierarchy of power.

Although small in scale, this exhibition effectively brought out the reciprocal relationship between employees and their environment—in other words, how secretaries in this period (invariably women) shaped the culture of office life in ways that have been marginalized. It is a measure of the curators’ achievement that what began as a scholarly thesis was so effectively translated into an exhibition. The artifacts and images communicated the overriding arc of the story and allowed for a series of fascinating diversions. Even the labeling, which deployed the traditional secretary’s spiral-bound notepad, was a reminder of the contrast between office paper and the materials normally found in art and design galleries. This exhibition should be a rejoinder to the major design museums that rely on a predigested diet of big names and popular themes. How Secretaries Changed the 20th-Century Office deserved wider exposure, but it made a start in the translation of historical research into a public forum.

Alexander Watt is an independent scholar based in New York. He was trained at Staffordshire University and the Courtauld Institute of Art in the United Kingdom. 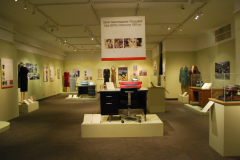 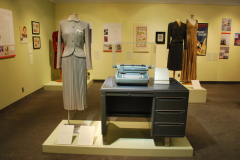