In Other Words
Reviewed by Kim Dhillon

In the range of material available to artists today—which is, without exaggeration, limitless—some disciplines have generated more-sustained criticism that gives attention to the aesthetics of the media than others. Painting, photography, and sculpture, as well as fashion and architecture, have carved out critical discourses where the conceptual is discussed symbiotically with the material, the form with the function, and the idea with the aesthetic. In contrast, art made of written language, or text-based art, has not succeeded to the same end. Why?

As a type of practice, art made of words (Fiona Banner calls hers “wordscapes”) is rarely discussed with consistent concern for the aesthetic of the way language is shown. If attention is given to the typographic or sculptural qualities of words, it is within a specific work. There is a lack of sustained discourse that develops a critical vocabulary to address all of the ways in which artists use language—visually, materially, sculpturally—across post-conceptual practice. This, I argue, is a leftover from the discourse that surrounded the first major wave of conceptual art (in America, mostly New York, from the mid-1960s to the early 1970s) wherein language became a medium in its own right for the first time. (Language had been used in art for decades, but often it was juxtaposed with image as in Dada, or treated in an illustrative manner as in pop art). Critics such as Lucy Lippard and artists like Sol LeWitt propagated the idea of “dematerialization” at the time. Language was a popular medium for conceptual artists, often the medium of choice. It was cheap and efficient to work with; it was portable, sparse, and pared down. Despite the range in practices today that demonstrate written language operating as a post-conceptual device with a critical relationship to its visual properties, few theorists or critics have sought to overturn this idea of “dematerialization,” (an idea that Lippard herself refuted as impossible years later).

One such theorist who has led the field is Johanna Drucker, an art historian, visual theorist, and artist of books and letterpress in her own right. Drucker’s volumes The Visible Word: Experimental Typography and Modern Art (1997) and Figuring the Word (1998) demonstrate the academic evidence for, and need to consider, typographic experimentation within visual arts practice. She argues, for the first time, the correlation between typographic experimentation and the artistic avant-garde. Drucker’s most detailed work on typography and avant-garde art tapers off at the end of the modernist period (she now focuses on the digital and has written about the history of the alphabet). Her studies on the visible word in modern art, however, laid the foundation from which we can begin to examine what language can be in art after conceptualism: a material and conceptual device at the same time. What happens, Drucker repeatedly asks, when we turn words into marks?

In Other Words, a group exhibition in Cork’s Lewis Glucksman Gallery, is an exhibition that demonstrates a concern within the humanities to reconsider the importance of the material, and among artists to continue to engage with language as a visual or material object. Curated jointly by Matt Packer, curator at the gallery, and Graham Allen, professor in the Department of English at University College Cork, the Glucksman exhibition emphasizes the material, sculptural, and architectural potential of language, and in particular it focuses on artworks in which the material representation of language is foregrounded. The artworks are by a range of mid- to late-career artists from post-conceptual practices. Many evidence a concern for the sculpture or material of language throughout their practices.

Take Kay Rosen. Based in Gary, Indiana, Rosen has been involved in international exhibitions over the last twenty years, yet her profile remains low (like that of many artists working primarily with text often does, with the exceptions of Jenny Holzer, Barbara Kruger, and Lawrence Weiner). Her works, usually understated letterings directly on gallery walls, represent text in a way that visually correlates to the works’ linguistic meaning. Phantom Limb (1993/2011) pares the word down so the letters replicate the absence suggested in the title; only a “p” and “b” remain, forcing the reader/viewer to fill the gap. Like Rosen’s, Peter Downsbrough’s text work Place / As And Time (2011) is economical in the vinyl letter material directly stuck on the wall. (This is a residual quality of many language works, and it evidences the appeal of the media to first wave conceptualists). Both demonstrate a thread between the visible word and its semiotic idea.

Though In Other Words emphasizes the material potential of language, not all of the works are three-dimensional. Like Rosen’s and Downsbrough’s works, Takahiko Iimura’s film White Calligraphy Re-Read (2010) is also two-dimensional. Iimura, a video artist, writer, and experimental filmmaker, has been working with the moving image since the 1960s. In White Calligraphy Iimura transfers scratched characters translating an early Japanese text to digital moving image. Flashing figures, they move too quickly to be read, even if one is fluent in Japanese. Instead we see scratches, marks, abstract shapes. An audio recording accompanies the work, reading the odd legible word aloud as the digital movie slows and pauses occasionally. It is a reworking of Iimura’s White Calligraphy (1967) made on 16mm film, wherein all the frames and characters play at the same illegible speed. Translating the characters/letterforms from analogue media to digital, Iimura’s work poses a question as to what happens to written language in an electronic age: is it increasingly malleable? In an era of text messages and word processing, is any word erasable without trace? As we move into a language-to-code dichotomy, does language finally fulfill the immaterial proposition that conceptualists sought?

Conceptualism was a disparate movement, and not all of the artists often heavily associated with it subscribed to the same positions on language. To many, written language served as a proposition, but to Robert Smithson, words were matter. Smithson is most renowned for his land art: sculptural works on a massive scale that shifted and altered and became part of the landscape around them. Yet a Smithson work on paper that maintains an importance in contemporary art history is his A Heap of Language (1966). Here, synonyms for language have been written in pencil, with the words forming a triangle on the page, a literal mound of words. Within the letterforms are fissures, cracks, and voids, ripe for exposing. To Smithson words were matter no different from the rocks and salt of his Spiral Jetty (1970). Artists working conceptually now are no less disparate in their engagements with language, but there is a lack of manifesto or rhetoric to which they must be articulated to adhere as a movement. Thus a fluidity of practice is to be expected in how language is used today.

Cerith Wyn Evans’s So to Speak (1998) works not with the linguistic letterform but with what it might suggest. A pair of neon-illuminated quotation marks are mounted on the wall, with a meter or so of space between them. Like many of Evans’s works (language-oriented or not), it is sparse and disrupts communication rather than seeking to give a clear message. It is an idea borrowed from postmodern graphic design. One can look to the work emerging out of Cranbrook Academy of Art in the 1980s wherein graphic design and typography no longer sought to deliver the clearest line of communication from A (sender/artist/designer) to B (receiver/reader/audience) but to disrupt the transmission of the idea and make an effort of the process of reading.1

Such an idea heightens one question that this exhibition poses to the audience: do we read or see art made of words? Is the aim of text in art to communicate efficiently? “All language is visual when read,” as poet Charles Bernstein noted in a forward to one of Drucker’s volumes.2 Benjamin Buchloh argues that the question of “reading” or “seeing” text in conceptual art was posed when artists presented a disorienting aesthetic proposition that left the audience with the tools to do either, but the work forced them to choose a strategy.3 Buchloh turns to Sol LeWitt’s Structures (1961–62) as an example of an artwork that signals the integration of “language and visual sign in a structural model.”4 Structures contains inscriptions that describe the support, the inscription itself, or an inversion of the two (“RED SQUARE,” “WHITE LETTERS”), and Buchloh argues that the inscriptions “created a continuous conflict in the viewer/reader . . . not just over which of the two roles [reading and seeing] should be performed in relation to the painting” but also over “the reliability of the given information and the sequence of that information: was the inscription to be given primacy over the visual qualities identified by the linguistic entity, or was the perceptual experience of the visual, formal, and chromatic element anterior to its mere denomination by language?” LeWitt’s Structures can be seen as a predecessor to Rosen in the suggestions that lie between words. Buchloh’s argument is particularly useful not only as a revision of the understanding of written language in the act of seeing/reading in conceptual art but as a model from which we can question written language as a device in art today.

The writing wasn’t necessarily on the wall at the Glucksman. Many of the works sat sculpturally in the central gallery space. Indeed, these works dominated the space and their quieter counterparts. Such artworks make you walk around them, view letters from all sides, and take in the installation as if it were a three-dimensional layout sprung from a page. I am not convinced that language need exist in three dimensions to demonstrate the material potential that Smithson suggests, or rather that by being three-dimensional, the artwork interrogates language’s materiality by default. At least, not in the works exhibited here. Sculptural works by Michael Stumpf, Erica Van Horn and Simon Cutts, or Niamh McCann (none of whom I have encountered before) literally make their language matter, and they make the experience of reading them a bodily one—the visitor moves around the words, which are often taller than an average-size person. But language works often prove most effective in the subtle silences, gaps, and pregnant pauses that emerge between a visible word and an idea. It is why Smithson’s work has so much longevity and relevance today, and where Evans and indeed Rosen and Downsbrough demonstrate such mastery in knowing when to write just enough and when to stop.

“Writing is made not just of ideas, but also of marks,” Bernstein wrote.5 Written language as the sole or dominant component within visual art practice originates in the late nineteenth-century avant-garde and follows the trajectory from the figurative poetry of the French symbolist Stephane Mallarmé (whose most significant poem, Un Coup de Des [1897], inspired works by Marcel Broodthaers and Sol LeWitt) to the word as material in futurist poetry and the calligrammes of Guillaume Apollinaire; the word-image as an authority-challenging tool in the Dada and surrealist movements; the appropriating advertising parlance of pop; and finally, the word in conceptual art, stripped down to the point that language itself became the artwork. The latter is perhaps the most influential of these developments, though not on contemporary visual practice engaging language but on the way we speak about such works. Where does that leave artists working with language today, after conceptualism? In Other Words suggests a vibrancy and criticality in how artists engage and meld the conceptual and material qualities of the word, to create language that is experiential and visual, without sacrificing the idea.

Kim Dhillon is preparing a doctoral thesis at the Royal College of Art on typography in art since conceptualism. 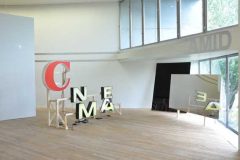