Norman Bel Geddes: I Have Seen the Future
Reviewed by Daniella Ohad

Visitors to the Futurama pavilion, a model of an American city of the future and the most popular attraction at the 1939 New York World’s Fair, were given a souvenir: a blue and white pin that read, “I have seen the Future.” This line was borrowed for the title of an exhibition on the man who designed Futurama, Norman Bel Geddes (1893–1958), one of America’s most imaginative and versatile designers.1 These words summarize a key notion that Geddes came to broadcast to millions of Americans living through the Depression—an optimistic vision for a better future. Despite his reputation as a designer of sleek and idealized products, Bel Geddes was, in the words of the exhibition’s curator, Donald Albrecht, “equally comfortable in the realms of fact and fantasy.”

The timing for the exhibition is symptomatic of the fact that popular interest in “modern design” in America appears to be on the rise. Despite the ongoing problems in definition, or perhaps because of the deep-seated uncertainties surrounding “Modernism” and “Moderne” in the United States, there have been various efforts to document the achievements of the 1920s and ’30s and to revive interest in this crucial design phase. Yale University Art Gallery recently exhibited “American Industrial Design from the John C. Waddell Collection,” with a substantial publication devoted to this important collection.2 In addition, major monographs on Gilbert Rohde and Paul T. Frankl, contemporaries of Geddes, were published in recent years, further highlighting the design culture of the interwar era;3 and in 2011 the U.S. Postal Service dedicated a sheet of stamps—“Pioneers of American Industrial Design”—to honor some of the nation’s most important and influential designers.

Geddes was instrumental in the emergence of modern design in the United States, in the birth of the industrial design profession itself, and in the aesthetic development of streamlining, a style that came to define America as a participant in international design culture between the two world wars. A graduate of the Cleveland School of Art (1911) and the School of the Art Institute of Chicago (1913), he began his career at the Chicago-based office of the advertising firm Barnes-Crosby before going on to establish his own prolific, and extraordinarily influential, industrial design office in 1927 in New York City. Along the way, he was involved in theatrical and film productions; developed prefabricated housing for middle-class Americans; designed department store windows and iconic consumer products such as the 1935 Electrolux vacuum cleaner (“the complete household servant”) and the 1939 Frigidaire; and worked for such massive corporations as Shell Oil, General Motors, and Union Pacific Railroad Co.

Yet despite Geddes’s powerful influence on American consumer culture, and his tremendous impact on the twentieth-century American way of life, his reputation steeply declined after the Second World War. This was partly because of the fortunes of his office, which quickly dispersed after he withdrew from actively running the business. However, there was a deeper cultural shift at work in the 1940s and ’50s. Not only had the United States been a place of refuge for expatriate architects and designers fleeing the rise of Nazism in Europe, offering opportunities for the unvarnished principles of European modernism to enter the United States market, but the Museum of Modern Art (MoMA) began its “Good Design” program, which effectively cast prewar American design adrift. From the very beginning, Philip Johnson and Edgar Kaufman, the twin agents of American “Modernism,” hated streamlining with a vengeance—so much so that it is still largely excluded from MoMA’s collection. When one contemplates the design values of Mad Men, Mid-Century Modern, and the sort of design knockoffs that are advertised on eBay and in the popular press as “Eames-Era,” Geddes’s work seems to belong to a different period entirely.

Geddes regained some visibility among the twenty-first-century public when his 1939 “Patriot Radio,” designed for Emerson Radio and Phonograph Corp., was featured as one of the U.S. Postal Service commemorative stamps. The radio was an appropriate icon since it manifested a stars-and-stripes motif that could be described as an emblem of American national identity. In addition, a representative selection of his consumer products was included in two seminal museum shows in New York: American Modern, 1925–1940: Design for a New Age (2000) at the Metropolitan Museum of Art, and American Century (1999) at the Whitney Museum of American Art. However, the only publication to address Geddes’s legacy seriously, Designing Modern America: Broadway to Main Street, by Christopher Innes, placed his achievements in relation to Joseph Urban, his mentor and one-time employer.4 Urban exerted a great influence on the American experience of modernity through his buildings, interiors, and theater productions, but his is not necessarily the best lens through which to view Geddes’s achievements. Thankfully the exhibition in Austin and New York fulfilled that role.

This monographic display was organized chronologically and thematically, representing chapters in a four-decade multifaceted career, from Geddes’s start in 1916 up to his death in 1958. What made the show most valuable was the overall arrangement, juxtaposing the various periods and disciplines, from theater design to industrial design to architecture and beyond, making it possible to appreciate the full scope of this influential pioneer who perceived transportation and industry as symbols of progress, speed, and the very essence of modern world. The exhibition consisted of some two hundred rarely seen drawings, models, and photographs, as well as a handful of key products. It revealed the development of style and thought, starting with the inspiration of German Expressionism and Russian Constructivism, evident in the early work for theater and film productions, and continuing through the innovative streamlining and the utopian cities of the 1930s, concluding with his engagement with the new type of modernism that flooded America during the postwar years.

Geddes first gained public recognition as an experimental and antirealist theater artist who expressed himself in vivid colored settings and lightings. His desire to reform theater design resulted in a tendency toward abstraction, embracing the new wave in theater that emphasized emotions and psychology above traditional narratives. In representing this first decade of his career (beginning in 1917), the exhibition included displays of models of theaters, such as the unrealized Repertory Theater of 1929, and the watercolor of an unrealized production of King Lear. These demonstrate the powerful influence of German Expressionism and the impact of current European theories deriving from Richard Wagner and Max Reinhardt.

The next decade was dedicated to consumer culture and industrial design, when Geddes branched out from theater itself into a type of industrial design that was no less theatrical. It was in this period that he laid the foundations of American industrial design and defined the principles of streamlining that would dominate American consumer society during the Depression. That part of the exhibition included key examples of Geddes’s design work, from automobiles to ashtrays, which were represented mostly in photographs, drawings, and newspaper clippings; also on display was his book Horizons, published in 1932.

The next section addressed perhaps the most ambitious chapter in Geddes’s career, when he sought to shape not just consumer products and the taste for the modern, but the entire American experience. These efforts began with the work he did for the Toledo Scale Company, first designing its scales and store fixtures in 1929–31, but moving on to shape the entire image of the company as well as its factory and interiors. His career peaked with Futurama, the General Motors pavilion at the 1939–40 New York World’s Fair, itself dedicated to presenting “the world of tomorrow.” The exhibition concluded with the postwar years, which saw a decline in Geddes’s health and in his career, resulting in more unrealized than completed projects.

While Geddes’s creative efforts range widely, it is his industrial design work that remains his greatest legacy. However, in this discipline the scope of the exhibition was somewhat narrow and less convincing. Only a small part of the show was dedicated to industrial design, with a limited number of actual products displayed in the center of the gallery. This was unfortunate, especially since Geddes was celebrated as the nation’s leading designer of consumer goods. In fact, by the early 1930s he was virtually a household name, and this is borne out by a cartoon in the New Yorker appearing in 1932. Henry Stanett’s caption states: “Gentlemen, I am convinced that our next new biscuit should be styled by Norman Bel Geddes.”

A few key examples had to stand for the vast output of his office, drawn mostly from the collection of George Kravis: the Patriot Radio; the Manhattan cocktail set in chrome-plated brass, designed for Revere Copper and Brass Company in 1938; and the “Soda King” syphon, designed for Walter Kidde Sales Co. Inc. in 1930. Miniature models stood in for the famously sleek automobiles Geddes designed, but the IBM typewriter of 1948 gave some sense of the physical character of his work as well as illustrating that he continued to streamline products in the postwar years, when the mode was no longer relevant and his career was fading.

In a chapter on furniture in the accompanying book, Christopher Long tells us that Geddes “repeatedly engaged with the problem of designing furniture for the modern age,” listing the numerous companies he worked with starting in 1928. The only evidence for this in the exhibition itself was a single photograph featuring a model bedroom by the Simmons Company. Items of furniture by Geddes could surely have been obtained, since they are to be found in museum collections all over the country. This was an unfortunate omission in an otherwise excellent exhibition that revealed the range and ambition of Geddes’s design work, albeit in miniature and on paper.

Daniella Ohad is an independent design historian, specializing in twentieth-century and contemporary design culture. She has taught in the School of Visual Arts, Pratt Institute, Parsons/The New School for Design, Cooper Union, and the New York School of Interior Design. 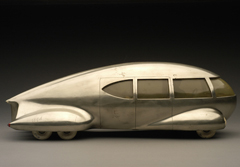