To architecture and design historians, the Czech city of Brno—“the Manchester of Central Europe”—is probably best known as home to a number of key modernist buildings, including the Villa Tugendhat by Mies van der Rohe. The city, however, also tries to maintain a presence in contemporary design. One of the main planks of this effort is the Biennial of Graphic Design, which was held for the twenty-fourth time in 2010 at the Moravian Gallery (Moravská Galerie).

The main focus of the Biennial is contemporary graphic design, and although it may not have the reputation of some of the more famous showcases in Europe and farther afield, Brno prides itself on having the oldest graphic design biennial (established in 1963). Further, the Biennial’s international scope, accompanying exhibitions, and symposium are well known among contemporary designers and critics.

In 2010, for the third time, a foreign guest curator was appointed by the Biennial organizers to create a contextual and interpretative alternative to the more corporate focus of the main part of the show. The British author and design critic Rick Poynor put together an exhibition on the legacy of surrealism in order to trace an “alternative tradition” (p. 7) in graphic design that has penetrated the visual field up to the present day. It should be stressed right away that, whereas younger practicing designers may find surrealism an alternative source of inspiration to the mainstream modernist tradition, the exhibition held few surprises for design historians with the slightest awareness of the history of visual culture. It is now a commonplace that surrealism did not restrict itself to painting or sculpture, but became an inspiration for a number of designers in the 1920s, 1930s, and especially the postmodern era.

The postmodern “rule breaking” which became associated with David Carson and Neville Brody, however, was not the main topic of the exhibition. In fact, neither Carson nor Brody appeared with even a token example. But, as rules and conventions are made to be broken, not only in fine art but also in visual communication, the juxtaposition of the early surrealists and later graphic designers represented a fruitful well of material for comparison, especially when the work of lesser-known designers from Central Europe was involved. The artifacts and objects displayed in Brno were taken from a wide range of sources including the collections of the host institution (the Moravian Gallery), the Museum of Decorative Arts in Prague, the Poster Gallery in Kraków, the National Museum in Poznan, private collectors, and others. They provided an insight into the more recent graphic design production in the region, alongside work by designers from Western Europe and the United States, such as Stefan Sagmeister, Ed Fella, and Elliott Earls.

In many respects, Poynor played it safe. Employing a rather canny title for the show—Cosi tísnivého: Surrealismus a grafický design (Uncanny: Surrealism and Graphic Design)—he was able to address directly the uneasy relationship between surrealist art and the whole edifice of Freudian theory. The focus on some of the main symbols of surrealism—the eye, the body (especially female) dissected or dismembered, unusual combinations of objects–also helped to highlight the elementary basis of surrealism in the functions of the human subconscious.

Poynor, however, also set out to show the “intermittent line of development up to the present,” and where that line was broken by various traditions that engaged with surrealist ideas at different moments in history.1 In other words, surrealist graphic design was not conceived in a historical succession, but rather as a series of thematic clusters in various media. The seven rooms of the exhibition were dedicated to characteristic features and aspects of surrealism–starting with the “Polymorphous Image and the Birth of the Marvellous,” which explored the origins of surrealism using standard examples from Max Ernst, Salvador Dali, Hans Bellmer, and Man Ray, as well as the Czech artist-designers Karel Teige, Toyen, and Jindřich Štýrský. These were complemented by some less-profound designers, mainly from Czechoslovakia (Josef Vyleťal), Poland (Jan Lenica), the United Kingdom (Andrzej Klimowski), and the United States (Jonathan Rosen). The succeeding sections were divided according to the visual content of the work. “The Surreal Body” showed mainly posters, in which the predominant motifs were individual body fractions, especially the eye, and insights into the human body. Book and record covers as well as posters and prints in the “Cabinet of Wonders” drew on the legacy of the Renaissance Wunderkammerand presented an array of bizarre items, as did “Obscure Objects of Desire.” The objectified female body was an obvious choice for a number of artist-designers in this section, the form dismantled and reassembled into new combinations of body parts. The penultimate section, “The Liberated Letterform,” focused on typography, exploring fonts created on the basis of surreal automatism.

The show culminated in “The Cinematograph of Dreams,” displaying large-scale film posters that seemed to combine motifs and elements from all the previous sections. Posters by Sagmeister or the French group M/M merged and “confused” various letterforms with images of the body and the face, showing how surrealism continues to thrive in the world of commercial graphic design. This section of the exhibition ended with a presentation of extracts from Czech, Slovak, Polish, and American movies, by directors such as Jan Švankmajer, Juraj Herz, or the U.K.-based Quay Brothers. Covering the period from the 1960s until the recent past, the movies further illustrated how the surreal idea is capable of crossing the boundaries between visual media. The films could also be interpreted as “motion graphics” exemplifying the ways in which surrealism has influenced the work of a large number of directors who have stood outside the movie industry mainstream. Several figures from this group claim an explicit dependence on the surrealists’ legacy. The Quay Brothers, for example, have always acknowledged their debt to the work of Švankmajer and Lenica, both of whom were well represented throughout the exhibition.

A number of graphic designers, in fact, appeared in more than one section of the show. A lot of space was devoted–not surprisingly–to two of the most famous Czech (actually Czechoslovak) artists, Teige and Švankmajer. Teige’s playful typography and collages on book covers provide an introduction to the exhibition overall and show him as one of the founding fathers of surrealism, at least in Central Europe. Švankmajer’s work has a more diverse form, and the examples on display ranged from two-dimensional still and moving images to bizarre three-dimensional objects and animals that typify the surreal spirit in the visual arts. On many occasions Švankmajer collaborated with his late wife, Eva Švankmajerová, who was also represented independently, although mainly by posters for her husband’s films.

Since Poynor worked with the graphic collection of the Moravian Gallery and other institutions in Central Europe, one could have expected him to draw on the specificities of the region. He certainly did justice to Czech (or rather Czechoslovak) and Polish poster, book, and film production, which were well represented alongside their better-known French, British, and American counterparts. Ernst’s fonts in Minotaure no. 5, for example, can be later recalled when looking at the alphabet created by the Czech Jindřich Heisler (1952) and the Polish Roman Cieślewicz (1964). Similarly, Bellmer’s photographs of Poupée were compared and contrasted with the use of dolls by Karel Teissig and Ivan Štěpán in their posters for the film adaptation of Agatha Christie’s 10 Little Niggers (1968), and with Leopold Lahola’s film The Sweet Time of Kalimagdora (1967), respectively.

The fact that many of these disturbing images originated in Czechoslovakia and Poland during the political turmoil of 1967 and 1968 might have been examined in more detail and could have provided for a fruitful juxtaposition with the original intentions of the surrealists in the early 1920s. This political dimension remained unexplored, and instead the focus was purely on the visual aspect of the surrealist tradition in graphic design.

To accompany the exhibition a bilingual catalogue (in Czech and English) was published in an appropriately unusual format. The written part is composed as a short dictionary, or rather encyclopedia, of surrealism and design, reminiscent of André Breton and Paul Eluard’s own dictionary of surrealism from 1938. Poynor’s version includes some of the authors and groups represented at the exhibition, and some concepts related to surrealism, but a rationale for the selection is missing. The graphic part contains good reproductions of a number of the works on display, and the overall layout and presentationof the booklet shows clear inspiration by surrealist typography and graphic design ideas.

As a whole, this exhibition on the relationship between graphic design and surreal imagination tried to disrupt the common notion of visual communication as a straightforward and intelligible process. Although it did not come up with anything hugely innovative or challenging, it provided a lively visual alternative to the contemporary graphic design shown at the Biennial. Hosted by the modernist and functionalist city of Brno, the exhibition managed to suggest that artistic ideas, such as those related to surrealism, may appear in the whole spectrum of visual culture and that they may challenge the alleged neatness and angularity of graphic production.

Marta Filipova is based in the United Kingdom and researches modern art in Central Europe and the questions of national identity in art and design. 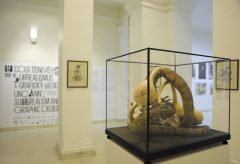