On Display: Henrietta Maria and the Materials of Magnificence at the Stuart Court
Reviewed by Joanna Marschner

The narrative of the life of Henrietta Maria, the youngest daughter of Henri IV of France, was charged politically from the moment of her birth in the Louvre in Paris in 1609. Married at the age of fifteen to Charles I of England in 1625, an alliance brokered to mark a brief period of English pro-French policy, she found herself immediately embroiled in the politics of personal relationships. As Queen Consort, she struggled initially to find her sphere of agency at court, in which George Villiers, 1st Earl of Buckingham, the favorite, had the King’s ear. If Buckingham’s assassination three years later allowed her to establish a more comfortable rapport with her husband, it would not be long before the institution of the monarchy itself was challenged, with the Queen cast as a significant irritant by reason of her nationality and her faith, which contributed to the unpopular image of the early Stuart monarchy.

Henrietta Maria valiantly, if controversially, supported Charles I as civil war broke out. From The Hague, she lobbied family connections in Europe on his behalf for support against the actions of the English Parliament. She set up her household in the Warden’s Lodgings at Merton College in Oxford, in order to be near him as he led Royalist troops against the Parliamentary forces. With the King’s defeat looking increasing likely, however, she retreated with her children back home to Paris in 1644, and it was there in 1649 that she learned her husband had been beheaded.

If Queen Consort no longer, she remained Queen Mother; her eldest son Charles II was restored to the English throne in 1660, and she followed him back to London to reclaim her houses and to remarshal her collections there. She would have had every intention of dying there too, if ill health had not deemed a warmer, dryer climate beneficial. After one last journey across the Channel in 1665, she died in the Chateau de Colombes in the Paris environs in 1669.

In this book, Erin Griffey discusses Henrietta Maria’s negotiation of her politically conflicted life. She was a French Bourbon princess and a devout Catholic, but also a Stuart queen, married to a Protestant husband, with her marital home in England. The book maps the Queen’s journeys from France to England and from England to France, sometimes in triumph and sometimes in ignominy. It also explores how she managed the transitions in her role, from princess to queen consort to queen mother, as well as the personal rites of passage from girlhood to motherhood, and eventually to widowhood and death. Griffey, as in her earlier discussions of court culture, does this through an examination of the Queen’s fashioning of her person in dress and portraiture, as well as in the furnishing of the spaces in which she lived and operated.

As daughter, sister, and aunt to the Bourbon kings, her royal blood made the manifestation of Henrietta Maria’s status essential—“sutable to her dignité.” Griffey takes as her evidence the financial records for building works for the Queen’s homes, the bills and receipts for their furnishing, and a great variety of lists and inventories, covering both the buildings associated with her, her collections, and her wardrobe. These have been painstakingly retrieved from archives in both Great Britain and France, held by public bodies and private individuals. They are discussed broadly chronologically, so that they can be assessed against the narrative of the Queen’s life, and they conjure up a fascinating and detailed impression of how her homes looked and functioned, as well as how political allegiances were signaled. The houses discussed include Oatlands, Greenwich, Richmond, and Wimbledon in London and its environs, which she used in the early years of her marriage, and the Louvre, Chaillot, and Colombes in France, her residences as a child, when in exile, and at the end of her life. Somerset House, however, is the main focus. The furnishings of her chapels are explored in detail. Missing are the Queen’s residences in The Hague and in Oxford, for which records are not easy to retrieve.

The houses were replete with paintings and tapestries, seat furniture and beds, sculpture and plate. Henrietta Maria herself, as she moved through these spaces, added to the complexity of their messages; for instance, the textiles of her dresses were green to suggest fertility or, so often, black to acknowledge loss, of her husband certainly but also of her status. She never lost her delight in French fashions: an indication of her taste but also where her loyalties lay, as a Frenchwoman. Three of the inventories are reproduced in detail as appendices to the volume, the first giving details of Henrietta Maria’s trousseau in 1625, the second of her possessions at Somerset House made by Henry Browne in 1665 after her retreat to Paris, and the last made after her death in 1669 of her possessions in Paris, Chaillot, and Colombes.

Griffey’s meticulously researched book adds usefully to a growing body of literature that examines the role played by royal women in the shaping of monarchy in the early modern period. Seminal to this debate are the important volumes edited by Clarissa Campbell Orr: Queenship in Britain, 1660–1837: Royal Patronage, Court Culture and Dynastic Politics(Manchester University Press, 2002) and Queenship in Europe, 1660–1815: The Role of the Consort (Cambridge University Press, 2004). The pan-European research network Marrying Cultures, led by Dr. Helen Watanabe-O’Kelly of Oxford University and funded by the Humanities in the European Research Area, has taken the exploration further in its examination of cultural transfer, ideologically and practically, as a consequence of diplomatic marriage between the royal houses of Europe. Its investigations focused on the movement not just of collections but also of people, skills, ceremonial, traditions, and taste. The project’s legacy at its conclusion in 2016 took the form of books, including Queens Consort, Cultural Transfer and European Politics, c. 1500–1800, as well as articles and digital resources. Griffey’s work importantly builds on and complements Caroline Hibbard’s research on Anne of Denmark, wife of King James I, the formidable Queen Consort whose legacy of display Henrietta Maria inherited. Some of the ideas she expounds so compellingly have their reflection in Enlightened Princesses: Caroline, Augusta, Charlotte, and the Shaping of the Modern World, the publication produced by a collaborative research project undertaken by Historic Royal Palaces and the Yale Center for British Art in 2017. This work examines the culturally political programs pursued by three generations of royal women of the British Court in the long eighteenth century. However, with its wealth of detailed information about the furnishing of elite dwellings, Griffey’s book will undoubtedly prove just as fascinating and indeed very useful to historians and curators of the decorative arts and to architectural historians.

Griffey’s book is well illustrated, and the images include many of artifacts that were originally collected, purchased, or commissioned by Henrietta Maria, which are still preserved in the Royal Collection in Britain or in collections elsewhere in Britain and Europe. The histories of some of the Queen’s possessions are perhaps the most compelling discussions of the volume. Their journeys—physically between owners and houses over national divides, as well as through changing contexts shaped by politics, taste, and fashion—are quite as lively and troubled as those of their first royal owner.

Joanna Marschner is senior curator at Historic Royal Palaces in London. She is author of Queen Caroline: Cultural Politics at the Early Eighteenth Century Court and lead curator of Enlightened Princesses: Caroline, Augusta, Charlotte and the Shaping of the Modern World, an exhibition staged at the Yale Center for British Art and in Kensington Palace, London, in 2017, as well as serving as editor of its accompanying publication. 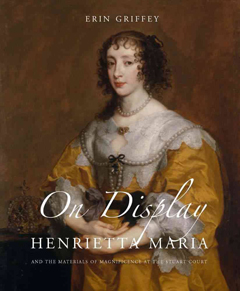