This volume collects about fifty years’ worth of essays by the doyen of the English-language study of iconoclasm. In the late ’60s, in the wake of the student revolts of 1968, the youthful David Freedberg vied with a group of young Germans—Martin Warnke and Horst Bredekamp (ultimately to become as important in the art-historical world as Freedberg has himself)—to bring the subject of image attack and image destruction onto the stage of art history. His elegant preface to this book, surveying (but not comprehensively or very analytically) the deluge of writings après lui, traces well the story of what has become a fundamental theme in the field of art history and the study of material culture. The lack of engagement with a vast swath of recent publications and approaches is a major problem with the book, despite the very useful overview with which it begins. I would add to Freedberg’s observations that iconoclasm’s significance historiographically has been to impose a substantive element to the study of the lives of images (as well as their modifications and deaths), expanding the field’s continuing obsession with the moment of creation and its fetish with artists or makers. Iconoclasm as a field of research has vibrantly added other interventive agencies to those of the creator or the patron.

In addition to the most welcome collection of some classic papers—a number of them not easy to find in their original form—we are also offered, somewhat more briefly, the author’s second and later thoughts, as well as his responses to some of the signal events of contemporary iconoclasm: the destruction of the Bamiyan Buddhas, the fall of Baghdad, the image attacks on President Zuma in his native South Africa, the Charlottesville riots and the toppling of Confederate statuary. These recent stories are more sketches and reflections than the careful scholarly thinking of Freedberg’s assembled influential pieces on Reform and Counter-Reformation in the Netherlands (1986 and 1976, respectively) , on iconoclasts and their motives (1985), and on the structure of Byzantine and European iconoclasm (1977)—the only article in all the literature to make an acute comparative analysis of the two great historical traumas around images in the European tradition and hence a monument for the future of comparative art history.

Looking back over this body of work, one is struck by its imbrication in the genesis of the author’s most famous publication, The Power of Images (1989), subtitled Studies in the History and Theory of Response. Freedberg’s account of the “iconoclastic impulse” (3) is essentially about response: “The desire to punish the image as living” (xv) underpinned by “psychopathologies of destruction” (38). This laudably viewer-centred approach to art is combined with the repeated observation that the phenomena he is discussing are universal across cultures—”over and over again I have found the same broad phenomena in widely separated cultures across time and space” (xvii), with “uncanny persistences” across history (26). As others have remarked, the model of a universal series of potential responses to art across cultures (nowhere apparently better evidenced than by iconoclasm) is, at the very least, anthropologically controversial since it allows a taxonomy of evidential options to speak for the totality of human experience, without the possibility that some options are simply not culturally available in some contexts. Moreover, “response” as an emotively charged engagement of the viewer’s agency is only one of the ways in which one can interpret the multiplicity of image destructions for which evidence is available to us across the histories of material culture. The recourse to pathology obviates the need to take political agency or the politics of iconoclasm entirely seriously. When the equestrian statue of George III, erected in 1770 at the southern tip of Manhattan Island, was torn down in July 1776, five days after the Declaration of Independence has been signed in Philadelphia, that was an act at least as political as it may have been passionate, and it announced the overturning of monarchy that the American War of Independence would ultimately confirm.

Freedberg’s defence of his position on response and its universality was never fully articulated in The Power of Images (which, of course, dealt with many other responses beyond image breaking). He writes, “The great art historian Michael Baxandall once asked me . . . what theology had to do with image; I looked at him in amazement and said, ‘Everything’” (15). A nice line. This book at last reveals the theology underpinning Freedberg’s own account:

We understand Lucio Fontana’s slashes (and perhaps punctured canvases too) through our own bodily sense of the specific movements those slashes entail . . . To see a Fontana cut is to have a physical sense of the action that made it . . . The same cortical substrate of the action with which Fontana made the cut is activated in the viewer simply by the sight of the result of that action . . . The cognitive neuroscience of bodily responses to visual images, real or imagined, has begun to enable us to understand the bodily aspects and both interoceptive and cortical dimensions even of conceptual gestures (48).

I write of Freedberg’s “theology” because (at least in the context of current knowledge) it requires belief to accept neuroscientific models of cognition and bodily response as a sufficient explanation of our reactions to art. But if you have the faith, then neuroscience can explain actions of similar types across cultures as universal, and it will accommodate transhistorical interpretations. In fact, I suspect, with enough faith, it can explain everything. However, not all of us, I fear, can accept the creed.

On Wednesday, April 9 2003, I was on the long track of moving walkways in Detroit airport en route to changing a plane. Live on all the screens were the extraordinary images of the toppling of Saddam Hussein’s statue in Firdos Square, Baghdad. This scene was presented as the triumphant event and permanently recorded emblem of the American liberation (conquest?) of Iraq. We now know this moment was staged for primetime television in the United States, but is that kind of staging central to the discursive strategies of virtuality? Many of the issues governing this book were in play in that moment: the powerful sense of agency in material destruction, the intensity of triumph that chooses a material emblem of the overcome on which to witness the symbolism of momentary glory, and the long, repetitive litany of such destructions: statues of Hitler after 1945, of Lenin after 1989, of Saddam, of the Bristol slaver Edward Colston in 2020, and, for the moment not yet, of the racist imperialist Cecil Rhodes in Oxford, from where I write. Freedberg discusses the fall of Saddam’s bronze image on pages 26–27, 197–98, and 239–41. He has a little—but not enough—to say in the course of this book about the virtuality of its filmed fall (e.g., 38–41), which is one of the new media innovations in the great discursive game of image destruction and which enabled my own participation in history.1 In that case, the filming was by the Americans; by the time their control had unravelled in the Middle East and the forces known as the Caliphate or ISIS or ISIL or Daesh had begun their fateful demolition of the museums of Mosul and Nineveh and the sites of Palmyra, Dura, and Hatra, it was the enemies of America who were not only destroying the idols as well as murdering those who defended them but also disseminating records of their hideous triumph across the internet.

Vicarious virtuality in the twenty-first century ensures not only record but the potential for universal and near simultaneous engagement with the destructive act; the footage of the blowing up of the Bamiyan Buddhas in 2001 preceding that of the pulling down of Saddam by two years. It also enables the possibility for endless repetition of the act, across various media. Nor does it matter who did the filming; the events of 9/11 were not filmed by Al Qaida but by its American victims, yet the symbol of the smashed towers could be claimed by both sides.2 But beyond this, the virtual world blurs the distinctions between works of art and actual people, just as the beheading of the octogenarian archaeologist Khaled al-Asaad in the ruins of Palmyra before the blowing up of its standing monuments was part of a single gruesome ritual of repetitive iconoclasms performed for the camera. At least experientially, if not ontologically, VR would seem to blur the distinction between image/representation and the real. In a weird sort of way, this most modern of technologies takes us back to that ancient non-Platonic mode of the image as presentation.

In contemporary media culture—an arena not discussed by Freedberg although he has an interest in the problems of pornography and censorship that occupy a great deal of the ethical concerns about virtuality—the iconoclasm of idols who have fallen short extends to what we might now call their cancellation. One might cite the recent reshooting of scenes containing the disgraced actor Kevin Spacey to airbrush him out of the film All the Money in the World or the cutting of his character in the last season of the TV series House of Cards (the corpse of a show demonstrating his humiliation by parading the absence of its star). My comparison of an archaeologist’s murder with the commercial decision to exclude a celebrity whose stock has become toxic (or, more correctly, whose stock is judged to be so with the public by the executives in control of all commercial decisions) may seem tasteless in the extreme—but that is the point. In the new universe of virtual iconoclasm within a global bubble of internet images, these are rhetorical gestures with actual implications for the lasting reputations of those involved. Indeed, we might now call it their virtual death except as objects of abuse or condemnation within the discursive structures of current media. In all these cases, the animate material symbol—the idol—of whatever is reprehensible to the assumed consumer of the virtual imagery (whether this be ancient statues or archaeologists or problematic celebrities) is easy prey for iconoclasm, which may be actual and then filmed or may be entirely virtual in the logic of real fakes. We are urgently awaiting a new empirical analysis and theoretical assessment of this great theme, some of whose older stories Freedberg’s book presents.

Jaś Elsner is senior research fellow at Corpus Christi College, Oxford University, UK, and visiting professor of art and religion in the Divinity School and Department of Art History at the University of Chicago. 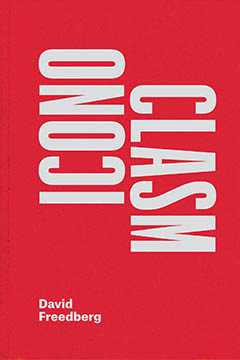