In the spring of 1903, Josef Hoffmann and Koloman Moser founded the Wiener Werkstätte. The company, officially recorded in the commercial court records as the Wiener Werkstätte Productiv-Genossenschaft von Kunsthandwerkern (Productive Cooperative of Artisans), was neither truly a cooperative—it was in reality operated essentially as a manufacturing firm and retail store—nor an alliance of artisans. Though highly skilled craftspeople were involved in the making of all of the company’s products, the Wiener Werkstätte was above all a modern design firm, one of the world’s first and, undoubtedly, one of the most illustrious. Other designers had a hand in fashioning the company’s products—as time went on the roster of Viennese artists associated with the firm grew to a lengthy list—but, initially, the great majority of the designs issued from Moser and Hoffmann.

The two men had known each other since around 1895. In 1897, with several others, they had founded the Siebener-Club (Club of Seven), an informal discussion group focused on the cause of modernism. The same year, they became founding members of the Secession, or Vereinigung bildender Künstler Österreichs (Union of Austrian Artists).

Moser, born in 1868, was two years older than Hoffmann. He was a native Viennese, from a well-to-do family, the son of Josef Moser, the administrator of the Theresianum, one of the city’s elite private boarding schools. After completing his secondary schooling, he studied painting at the Academy of Fine Arts with Christian Griepenkerl (whose students included Carl Otto Czeschka, Richard Gerstl, Max Kurzweil, Alfred Roller, and Egon Schiele) and others; then, after graduating in 1892, he began three years of training under Franz Matsch (the former partner of Gustav Klimt and his brother Ernst) at the Vienna Kunstgewerbeschule. Moser and Hoffmann began collaborating around the time of the founding of the Secession, producing objects and interiors in the new Jugendstil. They envisioned creating an organization that would allow them to “combine fine and applied art” in a modernist vein, but it was not until they met the textile industrialist Fritz Waerndorfer, owner of a cotton-spinning factory in Náchod (in what is now the Czech Republic), that they found the financial backing to realize their idea (294).

Moser, who was as prolific as the prodigious Hoffmann, created dozens of designs for the firm, and he and Hoffmann also collaborated on a series of exhibitions. Their work was based on a shared belief in the ideal of the Gesamtkunstwerk—of a unified and harmonized design aesthetic. Both men’s work sometimes also betrayed the influence of historical models—ofttimes classical or archaic in origin—or abstracted or conventionalized natural forms. But what set their designs apart was their early embrace of a new aesthetic, founded on clean, simple lines, elemental forms, and repeated geometries.

Repeated geometric forms were insistently advanced in Moser’s design for a sugar box from 1903, executed in silver and niello, with sharp, rectilinear lines cloaked entirely with a tight checkerboard pattern, resting on four tiny ball feet (see pages 328–29). It was a tour de force of a new purity of expression and a direct harbinger of all that came after in modernism. Moser would go on to do a series of related punchwork flower baskets and plant stands, which, with their precise and ordered lines, predicted the advent of Constructivism, De Stijl, and the Neue Sachlichkeit.

His work for the Wiener Werkstätte, however, ended early, in 1907. Concerned about the growing financial problems of the company—it was hemorrhaging money because of mismanagement and exorbitant operating costs—he called, in a letter to Hoffmann, for a shift in how the products were made, using less expensive means: “I believe the W. W. can only thrive if it abandons the expensive approach of producing its own objects that can get by without the designer’s immediate influence. I do not know whether we are agreed on that—I accept that I am wrong—because every object can only be produced as it is being done now—but no one can exist on that. Unless one is creating for posterity” (letter from Moser to Josef Hoffmann, February 3, 1907, quoted on p. 344).

Moser was also unhappy that Waerndorfer, concerned about keeping the firm afloat, had gone behind his back to his wife, Edith (Ditha) Mautner von Markhof, daughter of one of the empire’s great industrial fortunes, asking for money. Hoffmann, though, saw it all differently. He defended Waerndorfer and restated his belief in the importance of true handicraft production. The two old friends could not reconcile their differences, and Moser quit the firm. He turned instead to painting, occasionally producing set designs for operas or plays and, from time to time, graphic designs. In 1916, he was diagnosed with incurable cancer of the larynx. He died two years later.

In the literature of turn-of-the-century Vienna, Moser is always present, but he generally is accorded a secondary position in relation to Hoffmann. Hoffmann certainly had the more illustrious career. In later years, after Moser left the Wiener Werkstätte, Hoffmann would become perhaps the best-known designer in Europe, celebrated for his originality and for the exquisite quality of his work. He continued to operate the Wiener Werkstätte—nearly always at a loss—until it was finally forced into bankruptcy in 1932. He lived on till 1956, still churning out designs almost to his last days.

Koloman Moser: Designing Modern Vienna 1897–1907 served as the exhibition catalogue for a show at the Neue Galerie in New York in 2013, which subsequently traveled to the Museum of Fine Arts, Houston. Edited by Christian Witt-Dörring, it includes essays by many of the best scholars on Viennese modernism, including Rainald Franz (on Moser’s work as a graphic artist); Witt-Dörring (on his interiors and furniture); Angela Volker (on Moser’s designs for textiles, fashions, and theater costumes); Ernst Ploil (on his glass and ceramics); and Elisabeth Schmuttermeier (on the part he played in the Wiener Werkstätte). It is a welcome addition to the previously small body of works on Moser, and it adds new insights into his life, career, and work.1 The book is beautifully produced, with many full-page color images of Moser’s design work, along with a large number of historic black-and-white photographs, some never or rarely before reproduced. The essays are of equally high quality, thoroughly researched and lucidly written.

The picture of Moser that emerges from the texts and images is of an artist of remarkable breadth (he would eventually produce paintings, graphic designs, furnishings, glassworks, ceramics, fashions, small decorative and practical objects, and interiors) and ability. Yet a question—certainly the question—about Moser remains: to what extent was he responsible for forging the new language of purified form that would become synonymous with the early Viennese Moderne? It is a question that now is no longer entirely answerable, for not enough documentation remains for us to unravel the respective roles that Moser and Hoffmann played. What is clear is that for four or five years, from around 1900 to 1905, the two men worked in seemingly perfect tandem, leading the move away from the florid imagery of the early Jugendstil to a startlingly bare planar and linear art.

In the annals of modernism, the closest analogy to this extraordinary feat is that of Georges Braque and Pablo Picasso, and their search for a new art that would culminate in Cubism. Each man propelled and inspired the other, as Braque famously said, “like two mountain climbers roped together”; it was their collaborative labor that led them to a place that likely neither would have reached alone.2 So it seems to have been for Moser and Hoffmann. And the comparison here goes further: just as Picasso would emerge as the more renowned artist, casting Braque in his shadow, so, too, Hoffmann eventually eclipsed his earlier partner.

From our vantage today, however, it is beginning to appear more and more that it was Moser who was the stronger driving force in the Viennese quest for a new design. Hoffmann seemingly admitted as much in a lecture in 1911: “It was the painter Moser, who thanks to his activity as an illustrator knew more about the outside world and from then on had the greatest influence over us. His talent for planar art and every kind of craft innovation seemed fabulous to us” (Josef Hoffmann, “Meine Arbeit, Vortrag von 22. Februar 1911,” quoted on p. 14). In his incisive catalogue essay, Rainald Franz comes to the same conclusion: “The ‘jack-of-all-trades’ Koloman Moser was far more involved in the revival of artistic expression through line and plane than his friend Josef Hoffmann or other reform artists in Vienna around 1900. He perfected a system of graphic abstraction that was capable of developing motifs for all areas of the applied arts from floral and figurative models. In parallel with that, he developed a geometric system of primarily typographical decoration that provided the designer with new freedoms beyond the reference to reality” (85).

Indeed, it now appears that it was Moser’s experiments in graphic art—his mounting penchant for simple lines and abstraction—that formed the basis of the new design. What remained for him and Hoffmann was to develop this idea into a fully realized aesthetic. Witt-Dörring describes the process succinctly and well: “Moser’s faith in the idea of the Gesamtkunstwerk led him from the two-dimensional world of expression in painting and the graphic arts into the three-dimensional world of interior design and furniture. From the resulting tension, which he tried to resolve by breaking space down into planes, then recomposing it into a whole that was often atectonic, he produced his interiors and furniture, often in close collaboration with Hoffmann” (190). Together, thus, with little outside aid, Moser and Hoffmann invented the new language of modern design.

But in what certainly is still the most curious twist of this story, both men soon abandoned their revolutionary idea in favor of a different form-canon drawn largely from historical sources. It was as if they had pushed to the very boundaries of what was possible and, content with what they had wrought, withdrew to experiment anew.

Christopher Long is professor of architectural and design history at the University of Texas at Austin. 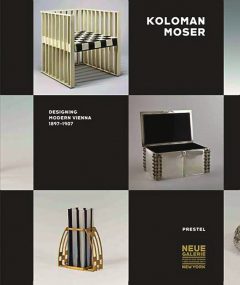