The Invention of the Colonial Americas: Data, Architecture, and the Archives of the Indies, 1781–1844.
Reviewed by Miruna Achim

When did colonial America begin? This is the polemical question Byron Ellsworth Hamann sets out to answer in his immensely erudite and lavishly illustrated The Invention of the Colonial Americas: Data, Architecture, and the Archives of the Indies, 1781–1844. As its title suggests, the book makes the bold and ultimately convincing claim that the founding in 1785 of the Archivo General de Indias (AGI) in Seville, which was meant to bring together documents related to Spanish possessions in the New World, marked at the same time a separation between Europe and America and, thus, the coming into being, conceptually, of the Atlantic Ocean as an expression of that separation—and this all in the broader context of the emergence of “colony,” “colonial,” and “colonialism” as politically and intellectually charged concepts. The book matters for offering a long-overdue reconstruction of the beginnings of one of the most important archives of the Iberian world and for doing so in a theoretically sophisticated way, by studying the AGI as an “interface,” “a dynamic assemblage of architecture, storage containers, documents, and people”(5–6), designed to be generative of new knowledge.

The Invention of the Colonial Americas builds, fittingly for an exploration of an archive, on a dazzlingly rich trove of material housed in libraries and archives on both sides of the Atlantic: inventories, foundation charters, private and institutional correspondence, personal diaries, plans, receipts for material and labor, historical photographs. The book is organized around five masterfully crafted chapters (in addition to an introduction and an epilogue), each of which opens with verses from Pierre Beaumarchais’s Barber of Seville (1775), thus transporting the reader to late eighteenth-century Seville and, with the drama’s imbroglios involving misplaced, purloined, and forged letters and documents, setting the tone for a study dedicated to paperwork. Most chapters have a sedimented feel, as they follow the footsteps of various historical characters who helped build or at different moments used the AGI; on their impressions Hamann layers his own keen observations and photographs, in an endeavor to make sense of the archive—its order and the changes it underwent over time.

Thus, for a historical account of how a visitor would have experienced the AGI in the decades following its foundation, Hamann turns first to George Ticknor’s journal (chapter 1). Ticknor visited the AGI in 1818, before he went on to become one of Harvard’s more renowned professors of Romance literatures. At another point, we find ourselves briefly, in 1830, in the company of Alexander von Humboldt, who from Saint Petersburg engaged a complicated social network, involving ambassadors to Russia and secretaries of state, to obtain information on Iberian mining laws. Others turned to the AGI to reconstruct family history or to conduct scholarly research. The latter was the case for Washington Irving, who visited the archive between 1828 and 1829 to locate documents on Christopher Columbus (chapter 4). Building on Irving’s own archive at the University of Virginia, Hamann reconstructs the Romantic historian’s requests for documents, which involved the US ambassador in Spain as broker before Spanish officials, against the background of Irving’s day-to-day activities in Seville, where he visited with friends and attended the premiere of Rossini’s The Barber of Seville. Ultimately, Irving did not find what he was looking for, and his diaries and correspondence paint a picture of the kind of frustration, boredom, and listlessness attendant on archival work not going as expected that many a reader will identify with. Then as now, research in the archive had its own rhythms and was as much a social and material as an intellectual affair, contingent upon the discretion or zealousness of archivists and what might seem like arbitrary decisions to grant or deny access to materials, as well as upon the order of the archive itself, which can either make visible or obscure information.

The Invention of the Colonial Americas makes an important contribution to the growing field of scholarship reflecting the so-called archival turn, which interrogates how the order of the archive both expresses and enacts social and political orders, establishes regimens of inclusion and exclusion, and makes objects and people come into being or vanish.1 For Hamann, the archive does so in very concrete ways, by acting as a material interface, whereby architecture and surface decoration, together with the choice of the marble for staircases and of wood for shelving, structures the ways in which data is collected, accessed, and processed and information is produced. The AGI reinforces a political order, but it does so as a material space organized at a particular moment and in the context of broader geopolitical arrangements.

Like much of Hamann’s storytelling, The Invention of the Colonial Americas begins by making unexpected connections which prove to be more than mere coincidences and which offer a frame for explaining the appearance of the object under consideration. On the one hand are the cataclysmic events that marked the separation between Europe and America, such as the Seven Years’ War and the US War of Independence. On the other is the perfection of devices to measure longitude in the second half of the eighteenth century that further made possible the imagination of hemispheric differences: while latitude, Hamann explains, had divided and united the world through parallel zones, longitude ruptured the two hemispheres apart (introduction). On a most immediate level, the AGI was a product of the so-called Dispute of the New World, a thoroughly studied debate that pitted European and American writers on questions of the nature and essence of the Old and New Worlds and the presumed inferiority of the latter in relation to the former.  The debates involved philosophical historians such as the count de Buffon, Cornelius de Pauw, Guillaume-Thomas Raynal, and William Robertson, whose works on these topics were published in the 1760s and 1770s. Robertson’s History of America (1777) resonated in Spain, where a translation was quickly undertaken by the Academia de la Historia, whose members met to enrich the text with materials from Spanish archives. The translation received hostile reviews and was never published, but the initiative to bring together all the documents related to Spanish America persisted, and Juan Bautista Muñoz, royal cosmographer of the Indies, played a considerable role in bringing it to fruition.

Until the foundation of the AGI, Spain’s American archives had been held at various institutions—at Simancas, at the Casa de Contratación (House of Trade), and at the Casa de los Reales Consejos (House of the Royal Councils) , among others—where they coexisted, at very close quarters, with documents related to Spain’s European domains. Hamann strives to make sure his readers imagine what that meant in practice, where administrators in charge of, say, Bolivian or Mexican silver were privy to the affairs of those in charge of taxes or criminal justice. For Juan Bautista Muñoz, such proximity was synonymous with chaos and promiscuity; for Hamann, it reflects a different order and regimen of administration, which saw the king’s domains as connected. Establishment of the AGI meant culling American material and bringing it together in one building, which, Muñoz believed, would reflect the munificence both of the Indies and of Spain relative to its European rivals. That building turned out to be the Lonja de Mercaderes in Seville, built by Renaissance architect Juan de Herrera and selected by Muñoz on account of its unity, proportion, and economy of line, which closely matched Muñoz’s own Enlightenment ideals of sobriety, simplicity, and masculinity (as against “feminine” vices such as confusion and ostentation). For Muñoz, Hamann reminds us, exterior clarity expressed interior order, and this was true for buildings as for people, so surface aesthetics had profound implications.

Having chosen the perfect space for the archive, Muñoz overlooked no detail—and neither does Hamann in his analysis—to bring into being a new kind of archival order at the AGI. Muñoz tore down internal walls to eliminate separations and give galleries a sweeping unity, further enhanced by the uniformity and regularity of floors, walls, and windows; he arranged cases thematically, to underline geographical and planetary associations and construct tight spatial-conceptual unities; for the shelves he chose a tropical American wood, mahogany, capable of withstanding heat and humidity; the metope, which ran continuous along the shelves, was carved with symbols of navigation, conquest, and the Americas, some of which, Hamann points out, came from Mexican tribute documents recently published by Francisco Antonio Lorenzana in his Historia de la Nueva España (1770); finally, the documents themselves were encased uniformly in cover sheets that included information about the contents. Overall, in contrast with earlier archives, which operated under the metaphor of the mine, where treasures were hidden and whence they were extracted (155), the AGI was organized as a grid, which, like contemporary surveys, supported the illusion of absolute control, created visual unity, registered absence and presence, worked to erase divergent origins, and, most importantly, sought to “produce the illusion that the objects placed under its control had never been ordered before” (156).

The new order at the AGI, meant to manifest Spain’s possessions in the New World, coincides with the emergence of colonialism as a concept with negative connotations, as Hamann suggests in his tour-de-force reconstruction of the history the term colony and its cognates in various European languages. Following independence from Spain, in the newly founded Latin American republics “colonial” became a tool for periodization, serving as a foil to the imaginary of political independence, and in some cases—in Mexico or Peru, for instance—giving name to a foreign element, an interruption between the age of pre-Hispanic ancestors and present national glory. This has meant that, in the cultural politics of nineteenth-century Mexico, for example, and for much of the twentieth century, colonial collections have been mostly marginalized in relation to the national museum complex—that is, segregated from the national canon. The mechanisms of inclusion and exclusion that underpin the formation of national museums and collections in Latin America have been at the center of much scholarship in the past decade. Not so for national archives. Hamann’s sophisticated and probing approach to the order of the AGI provides an important warning to the younger generation of historians who will eventually turn their interest to the understudied national archives of Latin America: avoid being seduced into taking the order of the archive at face value or being blinded by the powerful and ostensibly self-explanatory category of the nation; historicize the archive’s coming into being as the materialization of difference and of the political and cultural suppression of one kind of order in favor of another.

Miruna Achim is associate professor at the Universidad Autónoma Metropolitana-Cuajimalpa in Mexico City. Her research focuses on the history of science, medicine, and technology and on museum and collection studies. Her book From Idols to Antiquity: Forging the National Museum of Mexico (2017) received the 2018 prize for best book on the history of collecting from the Instituto Nacional de Antropología e Historia. 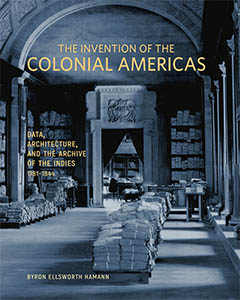