The Mind Is a Collection: Case Studies in Eighteenth-Century Thought
Reviewed by Katy Barrett

I often quip that my mind is now at capacity: that for every piece of information that enters, an old one must be cast out to make space. It is somehow easier to think of thoughts in a material sense, carefully stocked up within the physical space of the mind. I now find that I have simply been continuing a construction with a long history, which particularly took root in the Enlightenment: the idea that “the mind is a collection.”

Sean Silver’s new book of that name, The Mind Is a Collection: Case Studies in Eighteenth-Century Thought, adopts as its premise the notion that metaphors must be taken seriously. We should pay attention to the frequency with which seminal eighteenth-century thinkers described the mind as like a physical space, and thought processes as like physical experiences. Silver argues that this is not simply a useful turn of phrase but is what he terms a “cognitive ecology”—a mutual relationship between a person’s mind and environment, in which his or her work space helped to shape how he or she thought about the mind, and those thought processes in turn shaped the space to fit (13–16).

For historians of material culture this is a welcome argument, providing physical roots to the history of intellectual thought. The work of Quentin Skinner and J. G. A. Pocock connecting intellectual thought to its historical context has been continued by the attention of modern book historians to the materiality of the page. Silver may here be providing us with a further turn, with an argument that, once made, makes such sense that you wonder how it was not made before.

He focuses on the period 1660–1800 as the era in which we can see the key development of the philosophical dualism that separated mind and body, an idea which now seems to have entered modern attitudes as a given. Silver argues that our consequent ingrained view of the mind as separate from the material world is based on an inherent contradiction. In fact, embodied experience is the foundation of all ways in which we think about the world, and was so for those very Enlightenment thinkers usually credited with giving rise to that dualism. Thus, Locke conceived of his mind as a cabinet, and Addison of thinking as like walking; Hooke thought with his camera obscura, and Horace Walpole with his house designed around a secret center.

Across six chapters and twenty-eight case studies, Silver investigates six different kinds of “ecology” that eighteenth-century men and women developed to think about their minds: metaphor, design, digression, interiority, conception, and dispossession. As with most of Silver’s layered, thoughtful writing, the choice of words is particularly meaningful here. Maintaining the mind-material duality that is at the heart of his argument, each “case” is both an example, as in the medical sense, and a container for displaying and interpreting an object, as in a museum. Each chapter is built around a series of objects, which Silver uses to unpack their owner’s theory of mind.

As you might expect for the period, it all starts with John Locke and metaphor as a means of thinking about mind. Quoting Locke’s famous statement that “there is nothing in the mind that was not first in the senses” (3), Silver considers how Locke built his library at the same time he was building his theories, storing away books at the same time as he thought about the mind as a series of carefully stored thoughts, accessible as though they were extracts in a commonplace book. This leads on to further metaphors, and Locke continues to appear throughout the other case studies.

Moving on to “Design,” we meet Robert Hooke espousing the mind as a camera obscura, recording and creating a particular view of the world. His work as curator of experiments to the Royal Society is shown as integral to his idea of the mind as a repository. In “Digression,” Joseph Addison considers his mind as like his medal cabinet, but also his thought processes as like going for a walk. He builds the cognitive justification for polite culture, in which all art provides pleasure through the reference it makes to other works. In a walk, the well-stocked mind can build its own pleasure through drawing on such accrued knowledge, while in the medal cabinet each object marks the stimulus for a historical moment.

Walking then takes Silver to the most embodied relationship of mind to collection, through thinking about inwardness. Here he considers those whose troublesome bodies constantly shaped their experience of the world. William Hay and Samuel Pepys thought with their bladder stones, narrating their lives around the memory of pain and deliverance.

Yet thus far this collection remains poorly representative, as Silver acknowledges, for his rich examples are all gleaned from the intellectually and financially privileged men of eighteenth-century England: those with secure property whose cognitive ecologies could develop in a long-term relationship with the things that they owned. What of the women and the less wealthy, who had much less reason and opportunity to rely on an ecology of stuff?

Silver begins to address these more elusive subjects in his last two chapters. He says that he wishes he’d worked more on these examples, and one can only hope that he continues to do so elsewhere. They are the more compelling in their ephemerality and hidden nature, as any historian of material culture knows. Chapter 5 introduces the thorny issue of conception and how that moment in the female body, when the spark of life begins, is also the vehicle for thinking about the birth of an idea, or the “conceiving” of one. I’m nonetheless unconvinced that following William Hunter’s and Joshua Reynolds’s ideas on the matter, however interesting, really constitutes adding a female dimension to this discourse.

More compelling is the literary hack Laetitia Pilkington, who takes center stage in Silver’s final chapter on the dispossessed: that majority of London society who had only a transient relationship with things. He considers the parallel insecurity of financial and intellectual property, looking at a shilling alongside a popular story of its experiences. Pilkington, as a hack writer and bookseller, is exemplary of this constant circulation of both goods and ideas that was requisite for consumer culture but which also often required many to forgo the experience of truly owning either. This takes us, last of all, to Jonathan Wild’s infamous lost property office. Here Silver unlocks the knotty relationship through which property in the eighteenth century was made private: only on a public stage such as the lost property office could the idea of an individual with rights to possess be constructed.

Silver has created a fascinating collection and a richly nuanced argument that will make it hard ever to separate intellectual and material history again. Yet we also see his own cognitive ecology at work here, for this seems an intellectual historian’s approach to the material, in which it is the idea of an object that is most important.

What brings this materiality, with some irony, is Silver’s website to accompany the book, a turn into the digital which should interest readers of West 86th as much as the combining of the intellectual and the material. The website is Silver’s museum, for which he has painstakingly and lovingly built a digital model, with each chapter as a gallery section displaying the relevant objects. His background as a joiner becomes visible in these appealing digital spaces. The objects jump into life and Silver’s text feels more relaxed and personal, clearly carefully aimed at a more popular audience. Most striking is a case study that does not appear in the book at all, “Sir Kenelm’s Idea” (http://www.mindisacollection.org/digbys-idea).

This is an addition to the section on design, in which Silver investigates the idea of Renaissance polymath Sir Kenelm Digby that the mind at work is like a bowl of currants “wheeling and swimming about (almost in such sort, as you see in the washing of Currants … by the winding about of the Cookes hand).” Silver tells how he sought out the correct type of currants and tried the idea himself, recreating a historical process in precisely the fashion now current among material culture historians and historians of science. He includes a film of his own hand agitating the currants, in the technique taught him by his mother for making Irish soda bread, and ends with another of his setup to make currant wine using Sir Kenelm’s recipe.

In both book and website form, Silver’s is a rich, compelling, and beautifully argued work that should change how historians think, both with history of ideas and of material culture. But there is something about those currants that, for me, gets to what is new and exciting in interdisciplinary, and particularly digital, work. With his re-creations and his films, Silver is thinking with and through his materials in every sense, bringing the reader so clearly into his thought processes.

In his conclusion, he touches briefly on how the computer has extended our material thinking about the mind, suggesting that artificial intelligence has merely made the idea that the mind is a collection more intrinsic to our worldview. Silver’s physical book and digital museum are similarly entwined, and it is in this combination of mind, matter, and digital environment that Silver’s work is truly inspiring.

Katy Barrett is a curator and writer based in London, interested in histories of arts and sciences, and digital humanities. She blogs and tweets as @SpoonsonTrays. 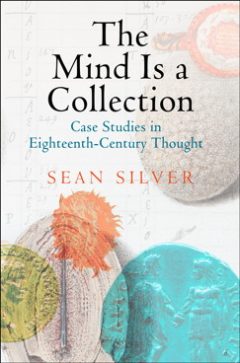