This review first appeared in artUS and is posted here with permission from the publisher.

Follow the signs through the galleries of ship models and Chinese-export porcelain to a stairwell where projections flicker across the wall above. Climb the elegant stairs and emerge in a Federal-style chamber, some 120 feet long, 50 feet wide, and 20 feet high. The arched windows are blocked. The only light comes from sixteen projectors, ten at dado height, six at the cornice below the coved ceiling. They cast tumbling words, red and white, on the walls, ceiling, and floor. The words appear handwritten, for Charles Sandison scanned them from eighteenth- and early nineteenth-century ships’ logs and customs manifests. Groups of raw pixels swirl among the ever-shifting words. They resolve into log entries—“The First Part Fresh Breezes & Squally”—and diagrams of navigational calculations. These hold steady among the constantly stirring words before bursting into brilliant spume.

The largest gallery in the Peabody Essex Museum—East India Marine Hall, completed in 1825—has not been emptied to accommodate Sandison’s work. Sandison’s ever-shifting light falls on portraits of ships’ captains and merchants who founded Salem’s East India Marine Society in 1799. It falls, too, on wall cases of curios these voyagers brought back from the South Seas and China, where they traveled in pursuit of trade and profit. The projected light also bathes nine carved and painted ships’ figureheads, each surging forward from the wall that supports it. 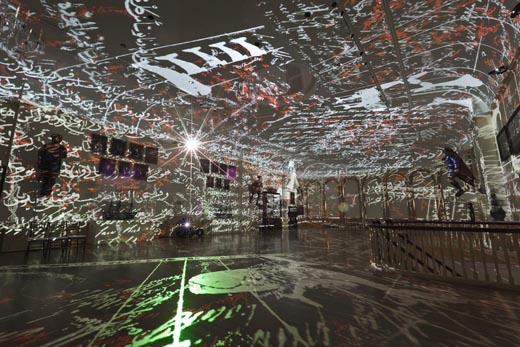 This installation, the first in a series of contemporary art interventions at the museum, marks an advance on Sandison’s earlier computer-generated data projections, for it marries theme and form perfectly. Sandison has contrived a phosphorescent sea in ceaseless motion using an algorithm derived from weather data streaming in real time. Words—some in Arabic—change direction as though caught by a shift in wind or current. The artist has incarnated the nautical memory of frail humans attempting to give shape and order to elemental flow through language and math in the great age of sail. Yet the images that froth and eddy imply more besides. They seem emanations from the room, its contents, and its absent original occupants, as though extrasensory perception has made visible all those intangibles that accompany the portraits and keepsakes. These emanations find evanescent embodiment in a matrix of wave and wind that stirs an ocean of human traces from long ago.

A display in an adjacent gallery, organized by Samuel Scott, associate curator of maritime art and history, complements Trevor Smith’s curatorial realization of Sandison’s vision. In Written on the Waves: Shipboard Journals and Logbooks, we can examine the very documents that Sandison scanned. Who could fail to be stirred by an entry in the logbook of the American privateer Tyrannicide describing a chase “within Gun Shott” in 1779, resulting in the disastrous springing of her main mast? We can read the very words, inked at sea and bound in coarse sailcloth, now cast by Sandison on the ceiling of East India Marine Hall. I can recall no museum intervention by a contemporary artist more evocative.