Walter Dexel, the author of this rather bad-tempered critique of the Bauhaus’s popular reputation, was not by any means a reactionary, nor did he represent a countertendency to modernism in Germany. Born in Munich in 1890, he had studied art and art history before the First World War and begun to move in avant-garde circles. On the outbreak of war, he joined the Bavarian Jaeger Battalion but was invalided out of the army. At this point he returned to his studies of art history while taking up a post as exhibition organizer at the Jena Kunstverein (artists’ association) that would shape his subsequent career.1 At Jena, Dexel immersed himself in the major art and design movements of the day, curating exhibitions on constructivism (1923), modern architecture (Neue deutsche Baukunst, 1924), advertising (Neue Reklame, 1927), and photography (Neue Wege der Photographie, 1928). In the course of these projects, he came to know many of the leading figures of the modern movement, including Kurt Schwitters, Walter Gropius, Mies van der Rohe, Bruno and Max Taut, László Moholy-Nagy, Oskar Schlemmer, Paul Klee, Wassily Kandinsky, and, above all, Theo van Doesburg. Throughout the 1920s, therefore, he positioned himself at the center of the most radical movements in modern art, design, and social change. He was equally active on the theoretical front, writing essays and newspaper articles on various aspects of contemporary culture.2 His most substantial publication at this time was the book that he wrote with his wife, Grete, Das Wohnhaus von heute (The house of today, 1928), which included architectural designs and furniture by various Bauhaus masters.

With regard to Dexel’s own painting, his friendship with Theo van Doesburg that developed in 1921–22 marked a shift away from his early expressionist manner toward a more systematic abstract art informed by the Dutch group De Stijl. This visual style would become the model for his commercial work once Dexel began to practice as a graphic designer, a field in which he would become one of the most important figures of his generation. A poster for the 1922 Deutsche Gewerbeschau (German trade exhibition) in Munich is one of his earliest essays in graphic design. Dexel, however, quickly acquired great facility in the handling of multidirectional text, asymmetrical layout, photography, and photomontage: the design features most closely associated with the New Typography, as defined by Moholy-Nagy, El Lissitzky, and Jan Tschichold. In 1928, at Schwitters’s invitation, Dexel joined the Ring neue Werbegstalter (Ring of new advertising designers). At this time he had begun to teach graphic design in the Magdeburger Kunstgewerbe- und Handwersschule (Magdeburg school of arts and crafts), one of the more progressive craft and design colleges in Weimar Germany. This phase of his career came to a close with the rise of the Nazis. Dismissed from the college in 1934 and forbidden to work in his constructivist style, Dexel retreated to Braunschweig (Brunswick) in Lower Saxony, where, as curator of the local museum, he built up the “Formsammlung” (Form collection), one of the most impressive collections of vernacular utensils. The culmination of his work in the museum was the publication Das Hausgerät Mitteleuropas (The household goods of Central Europe; 1962), a synthetic study of the form and design of domestic goods across a huge area and wide chronological period.

What this potted biography indicates is that Dexel was an active participant in the world of contemporary art and design in Germany, a theorist and practitioner at the forefront of radical innovation, and a full supporter of the values that were enshrined in the post-1923 Bauhaus manifestos. He was also a pioneer in what would now be described as the study of material culture and therefore well placed to assess the impact of the Bauhaus on design. As such, Dexel’s criticism is not directed fundamentally against the Bauhaus itself but against an uncritical and undifferentiated view of the college’s reputation. Dexel attacks the exaggerated and unjustified celebration of the Bauhaus as a unique source of modernist design and laments, in particular, the development of a concept of “Bauhaus style.” One can well imagine the irritation of many progressive designers whose careers in the 1920s and 1930s did not intersect with the Bauhaus but who felt that they were laboring in the same fields and often achieving more effective results. Dexel belongs to that group of artist-designers who remained in Germany and whose careers were cut short by the rise of Nazism. Not only did these figures become marginalized in their native country, but they did not participate in the construction of the exceptional image for the Bauhaus in the United States as the primary, if not exclusive, source of modern architecture and design.

If in 1964 Dexel found the close identification between the Bauhaus and modernist design to be a misconception, how much further have we come in the succeeding half century? Specialists may want to qualify the assumption that the Bauhaus is synonymous with modernism, but there is no question that this view has entered popular consciousness. The events and publications of this centenary year may be a moment to reintroduce a note of caution or even doubt. Is the concept of Bauhaus style “a myth”?

In my opinion, it is not the case that the Bauhaus in its time produced all the ideas that are today conveniently described as “Bauhaus style.” People wrongly call everything that occurred in the twenties by that term. In truth, it is rather the case that the Bauhaus, which entered into contemporary events with a completely different character and with quite different aims from what are now attributed to it (one only has to read carefully the founding proclamation of 1919), was carried along by the broad current of the time. It did not invent—or even less, direct—the architectural and formal developments that had already begun almost simultaneously in many European countries. On the contrary, the Bauhaus was gripped by these developments until it finally gained its identity during the final years at Weimar and the first years at Dessau.

From then on, however, the contribution of the Bauhaus—I stress, contribution—soon became very significant because, bearing in mind the poverty of the time, the college’s considerable resources, its dedicated buildings and workshops, and its accumulation of positive support and never-ending propaganda were a considerable impetus to success. The Bauhaus had far more momentum than, for instance, the much earlier De Stijl movement in Holland. For many years under Theo van Doesburg, De Stijl led an initially futile battle against the ideological romanticization of handicraft that still dominated in the early years of the Bauhaus—an extremely important struggle to establish what would later be called industrial design.

It is clear that the new ideas that emerged in the twenties did not originate at the Bauhaus. I say that from the point of view of a very close observer and a dear friend of many of those involved, both from within the Bauhaus itself and from the cohort of numerous critics.

If one thinks back to the essential events of that decade, we must mention first the Werkbund exhibition of the Weissenhofsiedlung in Stuttgart in 1927, and the German pavilion in Barcelona by Mies van der Rohe, which made the loudest bang. The Bauhaus had nothing to do with the latter, and very little to do with the Weissenhofsiedlung. Its role was in no way primus inter pares [first among equals]; rather, it had only a credible, and by no means outstanding, part, which various reviews and reports make abundantly clear, just as the leader of the Ring of architects was by no means superior to the others but had a key position within the circle. (The Ring was a union of approximately twenty of the most important architects in Germany.)

The contribution of the Bauhaus to advertising design of those years was also significant but not preeminent, as the exhibition Werbegraphik 1920–1930 [Advertising graphics, 1920–1930] at the Göppinger Galerie proved definitively. The design of porcelain, a medium that was so important in the 1920s, did not come from the Bauhaus at all. It arose from within the industry itself, which knew the right people to identify (Trude Petri, Hermann Gretsch). The situation was similar for glassware (Bruno Mauder). In the case of lighting fixtures and steel furniture, the contribution of the Bauhaus was more significant thanks to the experimental workshops (Wilhelm Wagenfeld, Marcel Breuer). However, we cannot credit the Bauhaus for the very finest steel furniture but rather the towering genius of Mies van der Rohe, who was also responsible for the Barcelona pavilion. His steel chair has still not been surpassed and remains in production unchanged. Meanwhile, the Gropius chair rests in well-deserved oblivion.

And the great masters of the Bauhaus, who gave the college its legendary fame—Feininger, Kandinsky, and Klee—were, of course, far distant from what we now understand by Bauhaus style.

After 1945, the sloppy media did not bother to really examine the history of the twenties, neither in the field of architecture nor in the area that is today called industrial design. It is high time that opponents and supporters stopped using the comfortable cliché “Bauhaus style,” a term that could only arise from the ignorance of the most elementary facts of the 1920s. Much more important than the endless repetition of this phrase would be to classify and specify, finally, the historic intellectual and design principles that grew together from almost all over Europe. One cannot simply cover a wide-ranging phenomenon that has grown out of so many roots with the slogan “Bauhaus style.” The term “Bauhaus style” is a myth, an unauthorized simplification and an unfair concealment of the many important forces that have worked to create the style of that time. Measured against the facts, the true absurdity of this term is shown most clearly by the ridiculous idea that Le Corbusier, Mies van der Rohe, Frank Lloyd Wright, Hugo Häring, Mart Stam, or Oud worked in the “Bauhaus style”—all of them significantly preceded it. 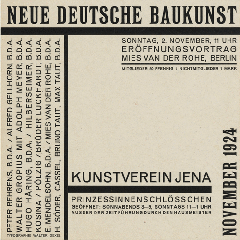